A look at two financially sound and highly profitable companies

With markets continuing to decline, investors might be interested in identifying stable companies that can help defend their portfolio. Thus, in this article, we will examine two consumer staple names that meet the following criteria, as I believe stocks with these qualifications have a higher chance of doing well even in a bear market:

First up is Lancaster Colony Corporation (

LANC, Financial), which is a manufacturer of specialty food products. The company is valued at $4.3 billion and generates annual revenue of nearly $1.5 billion.

Lancaster focuses primarily on two categories of food, frozen and non-frozen. The company offers salad dressings, breads, dips, noodles, croutons and other products. Its key brands include Marzetti and New York, but the company also has partnerships with Olive Garden and Buffalo Wild Wings.

Lancaster sells its products to retail and restaurant customers alike. Retail customers can find the company’s products at major stores like Walmart Inc. (

As a result of these scale advantages, Lancaster is well positioned in its industry to bring in lots of cash, resulting in high financial strength. 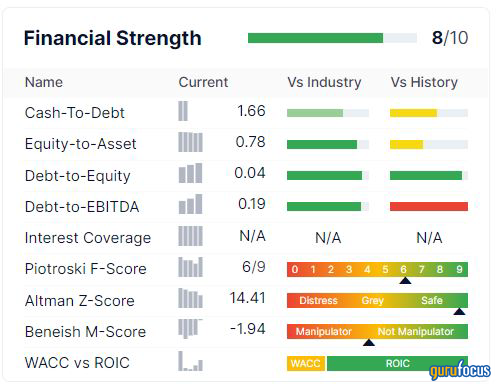 Lancaster scores an 8 out of 10 on financial strength from GuruFocus. This is accomplished in large part due to the company not having any long-term debt on its balance sheet. As a result, the cash-to-debt, debt-to-equity and debt-to-Ebitda ratios are all well ahead of the majority of the nearly 1,800 companies in the packaged goods industry. Lancaster also has a return on invested capital (ROIC) of 13.4% that is considerably ahead of its weighted average cost of capital (WACC) of 3.9%. 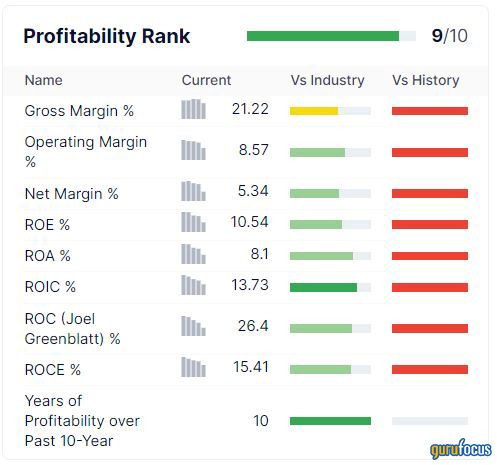 Lancaster’s profitability rank is a strong 9 out of 10. In this area, most of the company’s scores are among the worst in its history over the last decade. That said, most scores are above the majority of peers. For example, return on equity and return on assets are both higher than the industry average while ROIC is above more than 83% of the competition. Lancaster has remained profitable every year for the last decade, placing it ahead of 99.94% of peers.

Shares of Lancaster yield 2.1% today, slightly ahead of the 1.8% average yield for the S&P 500 Index. The company has an incredibly long dividend growth streak of 59 years, qualifying Lancaster as a Dividend King.

Lancaster is trading at a discount to its GF Value with the GF Value chart rating it as modestly undervalued. If the stock were to rise to its GF Value, it could have upside potential of 30% from current levels. 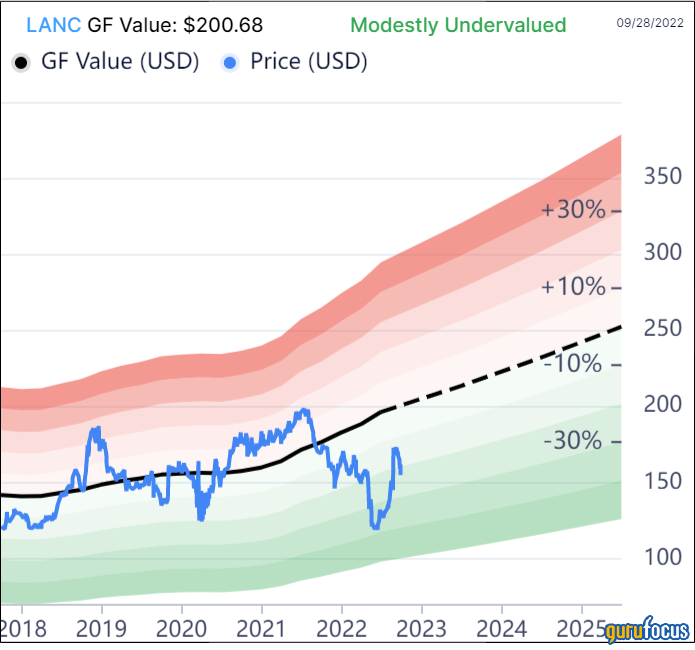 The second name for consideration is Tootsie Roll Industries Inc. (

TR, Financial), a leading provider of candy products. The company has a market capitalization of $2.3 billion and produced revenue of $566 million in 2021.

Tootsie Roll has been in business since the late 1800s and today is now one of the best-selling candy companies in the U.S. Outside of its namesake Tootsie Rolls, the company also sells Tootsie Pops, Blow Pops, Junior Mints and Sugar Daddy candies. Tootsie Roll also has a partnership with Walmart, giving the company an excellent way to connect with millions of customers. 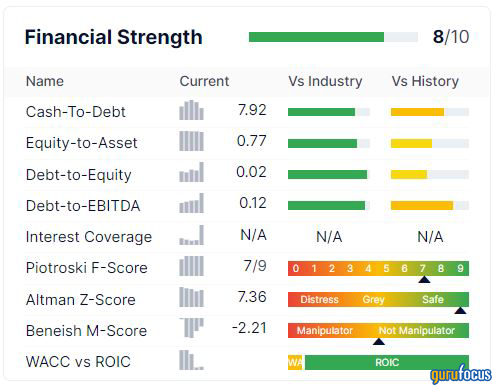 Tootsie Roll scores an 8 out of 10 on financial strength from GuruFocus. The company also has a low amount of debt on its balance sheet, leading to industry leading scores on the cash-to-debt, debt-to-equity and debt-to-Ebitda ratios. Tootsie Roll enjoys a very safe Altman Z-Score of 7.36, meaning that bankruptcy does not appear likely. Tootsie Roll's ROIC of 9.3% is much higher than its WACC of less than 1%. 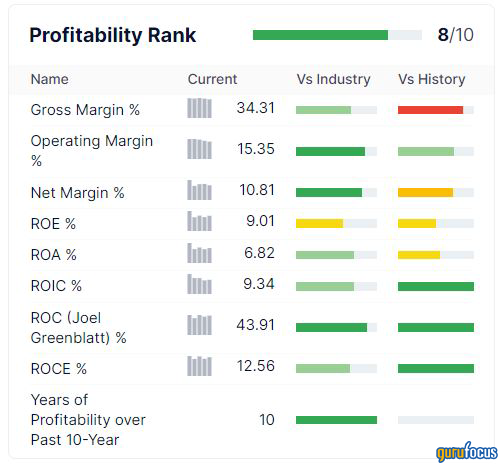 Tootsie Roll’s profitability rank is an 8 out of 10 as well. The company's return on capital as defined by

Joel Greenblatt (Trades, Portfolio) is above 88% of peers and is also one of the company’s top scores in the last 10 years. The operating and net margins are above most competitors. Tootsie Roll has 10 consecutive years of profitability, placing it above most companies in the industry.

Tootsie Roll’s stock yields a dividend of 1.1%. The company compensates for this low yield with 54 consecutive years of dividend growth, a streak topped by just a handful of other companies in the market place.

Shares of Tootsie Roll trade below their GF Value of $40.16 and are ratet as modestly undervalued. Reaching the GF Value could result in a return of 20%. 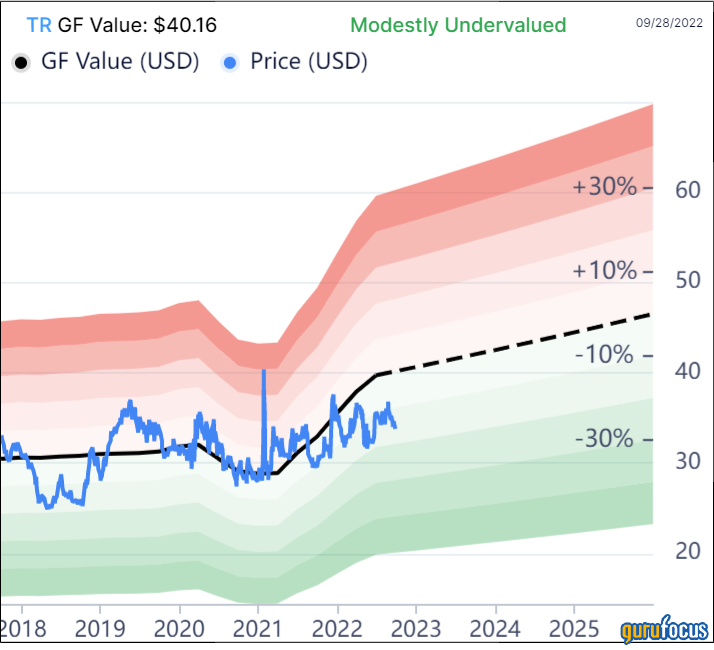 Investors looking to defend their portfolio with high-quality stocks may want to focus on looking for names that have strong financial and profitability rankings as these companies are positioned to endure market difficulty in my opinion.

Both Lancaster and Tootsie Roll score well on a variety of metrics, placing them near the top of their respective industries. Both companies also have long dividend growth track records and trade at a discount to their GF Value. Investors looking for safety, value and income could find these names attractive enough to add to their watch lists.