These stocks have been trending with investing gurus

The high inflation and rising interest rate environment has caused many technology and growth stocks to be decimated, as valuations have compressed and cyclicals have lost business. However, many of these technology stocks are now showing value characteristics and are owned by many of the guru investors followed by GuruFocus. Thus, in this article, we will be taking a look at two tech stocks that are trending among gurus and appear cheap at current levels.

AAPL, Financial) is the legendary technology company that pioneered the world's first graphical user interface and one of the first popular personal computers, the Apple One in 1976. Founded by Steve Jobs, the company is a living masterclass in how to build a category-defining company and an unstoppable brand. Then, Apple kept innovating, not only becoming a leader in computers but also annoucning the iPod in 2001 and the iPhone in 2007. Its quality and brand name has given Apple significant pricing power. 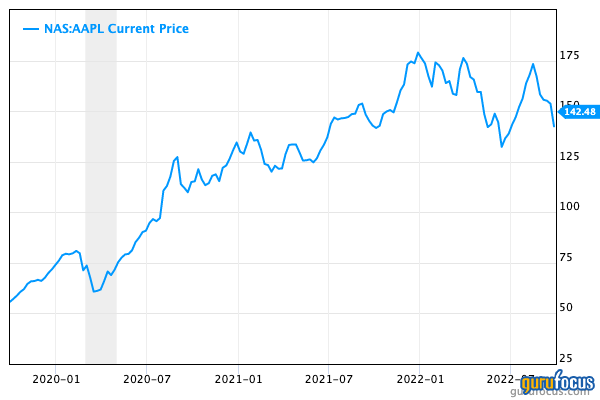 With such a legendary backdrop and track record of success, it is no surprise that many great investors own shares in Apple.

Warren Buffett (Trades, Portfolio), who previously didn’t invest in technology, has made this stock his firm's top holding over the years, buying 887 million shares of the company between 2016 and 2018. Buffett even added to this position in the second quarter of 2022 at an average price of $151 per share.

Ray Dalio (Trades, Portfolio) also added to his position in Apple in the second quarter of 2022. So has growth stock investing firm Baillie Gifford (Trades, Portfolio). Below is a chart of the guru buy/sell history for the stock in recent quarters:

Apple makes just under 50% of its revenue from the iPhone, which is great when sales are high as in the fiscal third quarter of 2022, but is also a risk for the company. The new iPhone 14 (released in September) has gotten off to a shaky start, as many review websites highlight a “slightly better camera” and some extra emergency features but “not much else." There are even a few viral memes going around social media that joke about how similar the iPhone 14 is to the iPhone 13.

In China, many scalpers who usually bulk buy new iPhones at launch and resell at a higher price have also had to sell at a discount due to lower demand. Now we won’t know how good or bad new iPhone sales have been until the fiscal fourth quarter results are released in late October 2022, but so far the signals don’t look great. The only consolation is as people naturally upgrade their phones, sales should still remain strong, but people will just be less reluctant to rush for an upgrade.

Apple generated strong services revenue of $19.6 billion in the fiscal third quarter of 2022, which increased by 12% year over year. This is a positive sign, as software platforms tend to result in higher margins. Across Apple Music, iCloud and the App Store, Apple had 860 million paid subscribers, which is substantial. 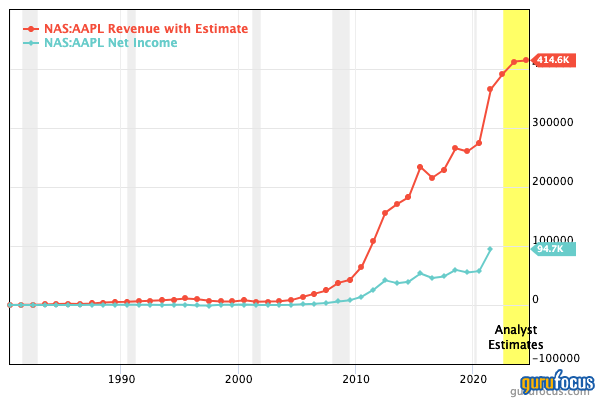 On to profitability, the quarter saw earnings per share of $1.20, which declined by 7.7% year over year. This was driven by a decline in Mac sales due to supply chain restrictions and component delays, in addition to negative foreign exchange headwinds from a strong dollar, which impacted international revenue.

Apple is trading at a price-earnings ratio of 23, which is close to its five-year average and thus fairly valued relative to historic multiples. 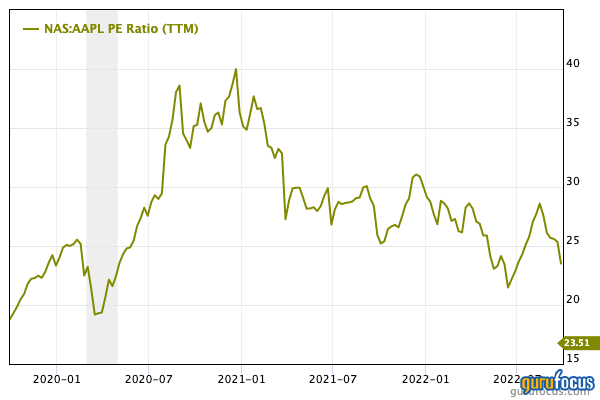 The GF Value chart indicates a fair value of $171 per share, meaning Apple is “modestly undervalued” at the time of writing. 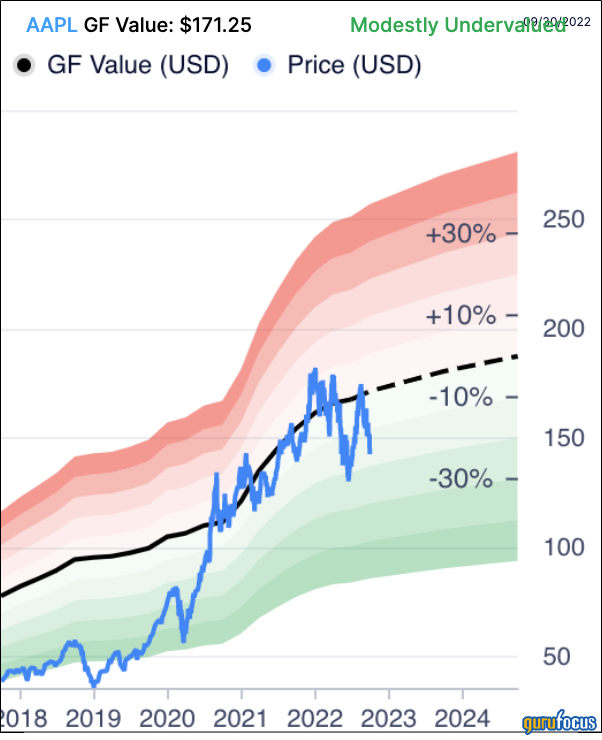 AMD, Financial) is the second trending guru stock I want to highlight. AMD is a semiconductor company that is competing with and gaining ground against the likes of Intel (INTC, Financial) and Nvidia (NVDA, Financial). Ray Dalio (Trades, Portfolio) was buying shares in the second quarter of 2022 at an average price of $94 per share. This stock is trading at ~$64 per share at the time of writing and thus is ~33% cheaper than Dalio’s average buy price.

AMD generated solid financial results for the second quarter of 2022. Revenue was $6.6 billion, which increased by a blistering 70% year over year and beat analyst estimates by $21 million. However, it should be noted this does include revenue from the acquisition of Xilinx, a leader in Field Programmable Gate Arrays (FPGA). These are basically semiconductor devices that can offer flexibility, high performance and customization. A common use case for the devices is in fighter jets, where lower power consumption and high performance is required. 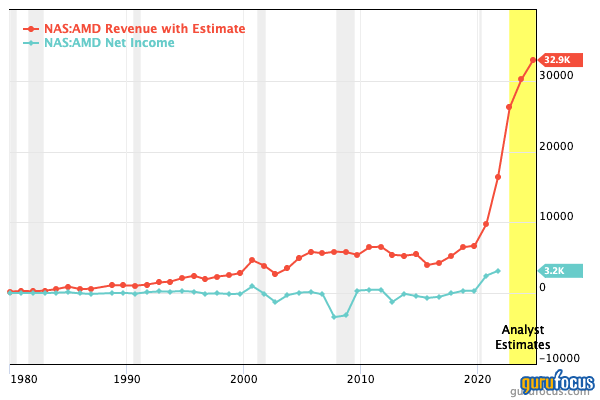 The company generated earnings per share of $0.27, which was down substantially from the $0.58 generated in the prior-year quarter. This was driven by lower net income as the semiconductor industry spirals into a cyclical downturn post-chip-shortage.

The good news is AMD has a solid balance sheet to weather the storm, with cash, cash equivalents and short term investments of ~$6 billion compared to debt of ~$2.8 billion. Management also showed confidence and bought back $920 million of stock in the second quarter.

AMD is trading at a price-earnings ratio of just 14.75, which is ~68% cheaper than its five-year average. 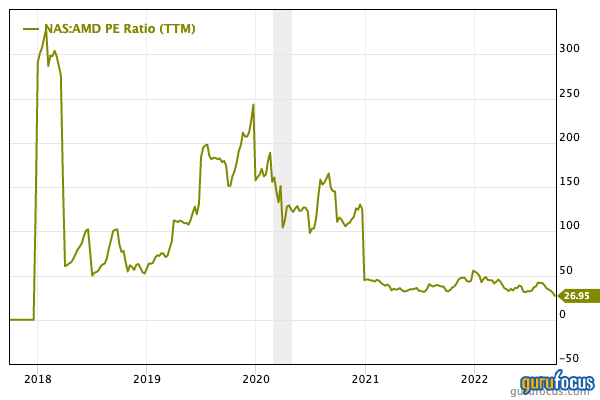 The GF Value chart indicates a fair value of $146 per share for the stock. However, GuruFocus does warn of a possible “value trap” due to the sharp decline in operating income. However, I don’t deem this to be a major issue given the aforementioned cyclical downturn in the semiconductor industry, which is poised to rebound in the long term. 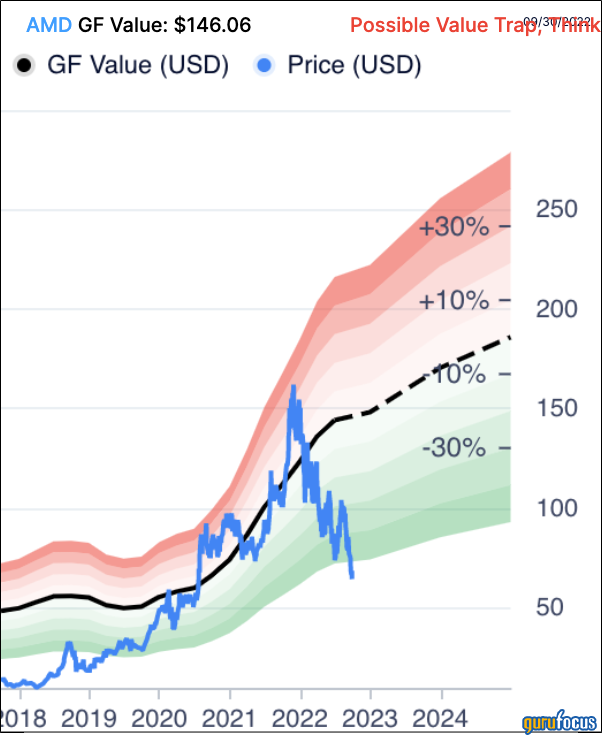 In the words of

Howard Marks (Trades, Portfolio) “the market moves in cycles." We are currently going through a cyclical period where technology stocks are out of favor. However, most high-quality companies tend to not decline forever, and thus investors with a long-term viewpoint can use cyclicality as an opportunity to find value.
Also check out: