2 High Yielders for Income and Value

According to Morningstar Inc. (

MORN, Financial), the total return for the S&P 500 Index year-to-date is approaching -25%. With such a drastic decline, investors appear to be willing to throw the baby out with the bathwater to preserve capital. This has led to some steep declines across almost all sectors and resulted in much higher than usual dividend yields for many names.

This article will examine two stocks that have recently become high yielders, offering dividend yields that are well above their respective five-year averages. In addition to paying a higher than usual yield, these names are also trading below their intrinsic values according to the GF Value chart.

First up is JPMorgan Chase & Co. (

JPM, Financial), one of the largest financial institutions in the world. The company has a market capitalization of $307 billion and has generated revenue in excess of $63 billion over the last year.

JPMorgan offers a host of financial services, including consumer and community banking, investment banking, asset management and lending. The company operates in more than 60 countries and has close to 5,000 branches in the U.S.

With a current dividend of $4.00 per share, JPMorgan has a forward dividend yield of 3.8%. According to Value Line, the stock has a five-year average yield of 2.7%. The present yield is almost 41% higher than this medium-term average.

JPMorgan’s dividend growth streak stands at 11 years, though the dividend payment has remained the same for five consecutive payments. The dividend is likely safe considering the expected payout ratio for 2022 is 36%.

Shares are down more than 35% for the year, but are attractively priced when looking at the GF Value chart. 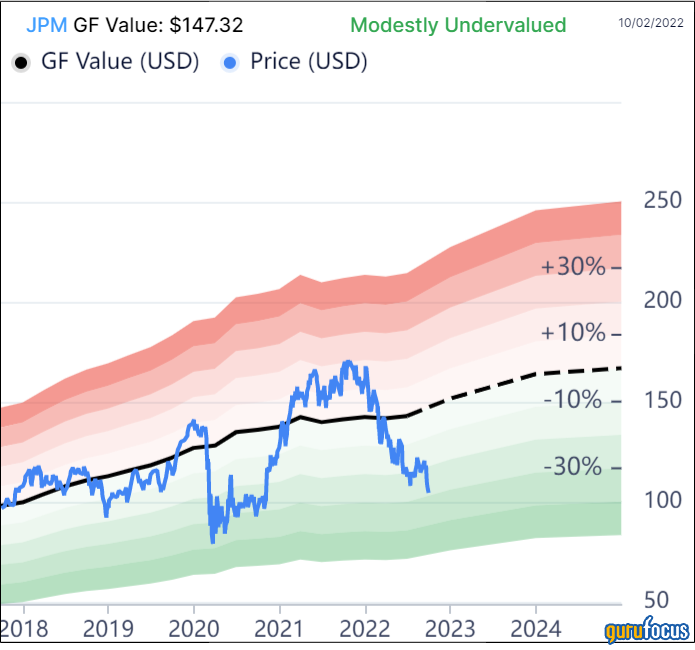 JPMorgan could return close to 41% if the stock were to reach its GF Value. Shares are rated as modestly undervalued. 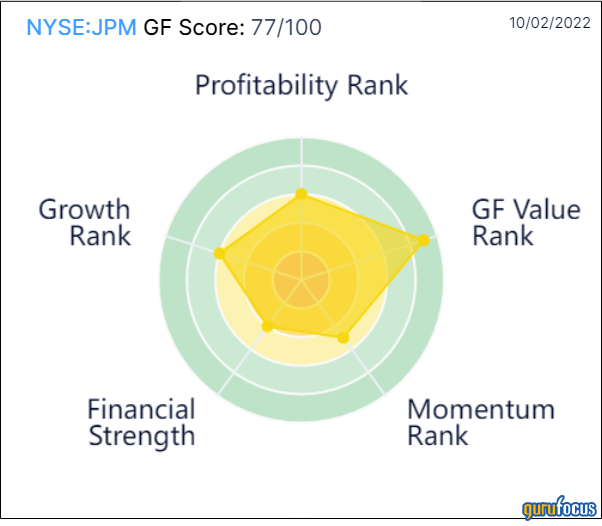 JPMorgan receives a 6 out of 10 on profitability. Net margin and return on equity are better than two-thirds of the competition and among the best scores over the last decade for the company. Each of the last 10 years has been profitable for JPMorgan. The company’s return on assets is likely what results in the middling score on profitability as this figure is just average for the industry and the company’s last 10-year period.

Growth is also rated as 6 out of 10, mostly due to strong revenue, earnings per share and free cash flow growth over the last three years. According to Morningstar analysts, forward revenue growth of 4.1% is below 69% of peers.

Financial strength is on the weaker end, scoring just a 4 out of 10. All of the ratios measured by GuruFocus for this score are below the majority of peers, but the company’s debt-to-equity and cash-to-debt ratios are near the high end of JPMorgan’s performance for the last decade.

The second name to consider is Unilever PLC (

UL, Financial), a leading consumer staples name. The company is based in the United Kingdom, has a market capitalization approaching $112 billion and produced annual revenue of $60 billion in 2021.

Unilever’s dividend does fluctuate because of currency exchange rates, but the stock has paid a total of $1.87 over the last four payments, resulting in a dividend yield of 4.3% using current prices. The five-year average yield is 3.2%, meaning that the present yield is 34% higher than the medium-term average.

U.S. shareholders have seen their dividends grow for the past six years. Unilever has a projected payout ratio of 66% for 2022, which is elevated but not to a level that a cut looks to be possible. This also matches the 10-year average payout ratio of 66%.

The stock is lower by almost 19% in 2021, but Unilever could have meaningful upside potential based on its GF Value chart. 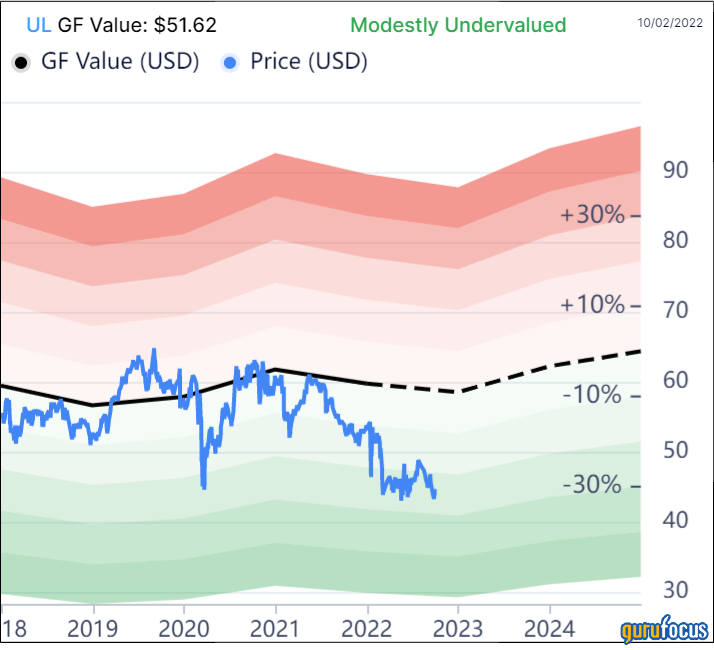 Reaching the GF Value would imply a nearly 18% gain in shares of Unilever from current levels. The company is rated as modestly undervalued. 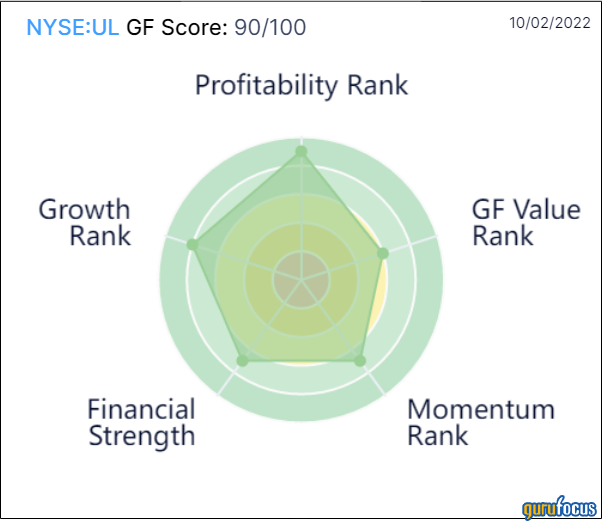 Unilever’s best showing comes in the area of profitability, where it scores a 9 out of 10. The company has industry-leading scores on gross margin, operating margin and net margin. These are, however, more middle of the road for the company over the last 10-year period. Return on equity is also very strong and the company has turned in 10 profitable years over the last decade.

Growth is a respectable 8 out of 10, led by a three-year book value growth rate that is ahead of peers. Forward earnings and revenue growth projections from Morningstar analysts are below 68% and 60% of the industry.

Unilever’s financial strength is rated as 7 out of 10. The equity-to-asset ratio is near the bottom of the peer group and below the company’s median for the last 10 years. Interest coverage has declined largely to ballooning debt levels over the past few years. On the plus side, the company has an enviable cash-to-debt position. Unilever has also proven very successful at creating value for shareholders, as the return on invested capital (ROIC) of 10.8% greatly outweighs its weighted average cost of capital (WACC) of 2.3%.

The GF Value rank is 6 out of 10, with most valuation ratios in the middle of the peer group. The price-to-free-cash-flow and price-to-operating-cash-flow ratios are among the company’s best showing in the last decade.

The market-wide selloff has spared few stocks this year. The upside of this decline is that income and value investors are finding that attractive yields and valuations are much easier to come by than they were just a few years ago.

JPMorgan and Unilever are two leading companies in their respective industries. Both stocks are trading with yields that are among their highest in quite some time. They are also well ahead of their five-year averages. JPMorgan and Unilever also trade at a nice discount to their GF Values, suggesting value is in store.