"Those that fail to learn from history are doomed to repeat it.” -Winston Churchill

BIIB, Financial) and, to a lesser degree, Eisai Co. Ltd. (ESALY, Financial), Eli Lilly and Co. (LLY, Financial) and Roche Holding AG (RHHBY, Financial) might want to heed the warning from Churchill. Shares of the four companies shot up last week on the news an experimental medication from Eisai and Biogen showed promise in treating Alzheimer’s.

Biogen shares led the way, with the stock of the Boston-area biopharma climbing about 36% to a year-to-date high of $267 on the announcement its drug lecanemab significantly slowed the decline of people with Alzheimer’s disease in a large phase 3 clinical trial.

The Biogen drug Aduhelm was greeted by similar investor euphoria when the Alzheimer’s medication was approved by the Food and Drug Administration in June 2021, pushing the company’s shares to $468. The drug became steeped in controversy before and after it was greenlighted, however. Many scientists insisted it did not work and if it did the benefit was so small it did not justify the cost. The treatment’s death knell was sounded in May when Medicare decided to limit payment to only patients enrolled in years-long government studies.

As reported here, Biogen recently decided to cut commercial support of the treatment to the bare bones, saying it will provide resources only to manage patients across programs, including a continued free program for patients currently being treated in the United States. Recognizing those limits would stifle the commercial potential of Aduhelm, Biogen pulled the plug on its marketing support. 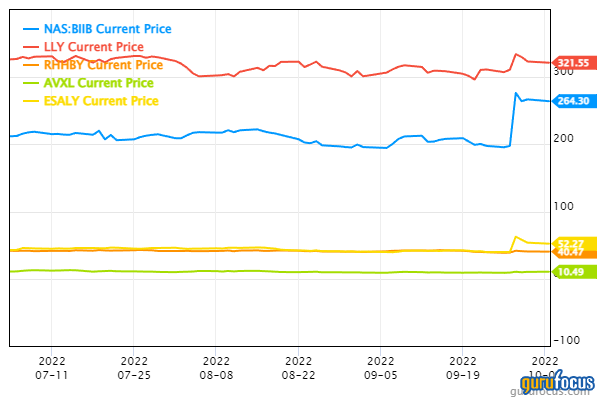 The past week has been a good one for stocks of Alzheimer’s drug companies, especially Biogen.

Investors would be wise to be cautious about lecanemab because it works in the same way as Aduhelm, breaking up amyloid, a protein that has been the subject of Alzheimer’s research for years. In fact, almost all amyloid-targeting drugs have failed key studies, which has stirred debate about whether time and resources would be better spent testing other hypotheses, according to an article in BioPharma Dive.

But lecanemab does have its supporters. BioPharma Dive reported that Robert Vassar, a professor of neurology and cell and developmental biology at Northwestern University, said lecanemab is “not going to be the be-all, end-all silver bullet, but it is going to be one of many tools that the physician will use in the future to treat Alzheimer’s.” And Thomas Wisniewski, director of the Alzheimer’s Disease Research Center at NYU Langone, argued that there are “significant differences in the quality of the data in the Aduhelm story” versus lecanemab.

“This seems to be much cleaner,” Wisniewski said. “All the data is pointing in a similar direction, so there aren’t inherent contradictions as far as we can judge.”

Eli Lilly’s amyloid-targeting drug donanemab is under expedited review by the FDA. The medication was able to slow Alzheimer’s patients’ decline by 32% in a smaller phase 2 trial, although the benefit over a placebo lessened by the trial’s end at 76 weeks.

Meanwhile, Roche is supposed to get a readout from the phase 3 trial of its amyloid drug gantenerumab before the end of the year. The drug has had a mixed, and lengthy, history in a clinical study. Two previous phase 3 trials were stopped because the drug showed no benefit to patients. But because the treatment reduced brain amyloid, it gained a Breakthrough Therapy designation from the FDA, earning further research.

Investors skeptical about putting their money into amyloid-targeting companies might want to consider the shares of New York City-based Anavex Life Sciences Corp. (

AVXL, Financial), which is taking a different approach. Results from a phase 3 trial of the company’s drug larcamesine hydrochloride are expected shortly. The oral pill targets the Sigma-1 receptor, which could alter signaling functions to provide neuroprotective and antiapoptotic effects. Shares of the small-cap company piggybacked on the Biogen news, climbing more than 10% to $10.49 last week, which is still less than half of its 52-week high.