These two stocks have the potential to hold up well even in a recession.

Peter Lynch is a legendary investor who was the fund manager for the Magellan Fund at Fidelity Investments. During the 1980s, Lynch generated investment returns of 29% annually, beating the market for over a decade.

One part of his investment strategy was to invest in "unpopular" or “boring” businesses that people weren't excited about, from funeral businesses to garbage collection companies, as these stocks do not tend to attract speculators and are thus more likely to provide value opportunities.

Unpopular businesses also tend to have less competition, as not many Stanford MBAs seeking venture capital investments in Silicon Valley would say "I want to go into the garbage industry." Most people want to go into something more exciting such as social media, technology or the restaurant business. Thus, unpopular industries often have less competition, making it easier for the few companies in the space to achieve growth.

In this article, we will go over two famous Peter Lynch stocks which he invested in during the 1980s and which have still continued to produce strong returns and generate fortunes for investors even after Lynch's retirement. These two stocks are also recession-proof investments as they provide vital services that will not see a drop in demand even in tough economic conditions.

WM, Financial) now owns 293 landfills, 346 transfer sites and 26,000 garbage trucks. Lynch mentions the stock and the industry 20 times in his book "One Up on Wall Street" and states, “It’s hard to think of a more perfect industry." This is because people are fundamentally “disturbed” by things like toxic waste dumps and sewage. This lack of glamorous appeal scares off many Wall street investors and even competition.

Very few entrepreneurs have the dream of going into the garbage business. Human beings are also motivated by status hierarchies, thus garbage may be seen as low status, whereas luxury supercars and fashion are seen as more high status and interesting. The lack of interest in Waste Management means the company has faced little competition from new entrants. By 1989, when Lynch released his book, the stock was up about a hundredfold from when he invested.

Lynch also highlights the prior association of Waste Management with the mafia, which scared off a lot of Wall Street analysts who didn’t want to get tangled up in that.

Waste Management stock has continued to perform strong and increased by over 4,200% cumulatively since 1989. Since 2020 alone, the stock price has increased by 87%, which is fantastic. 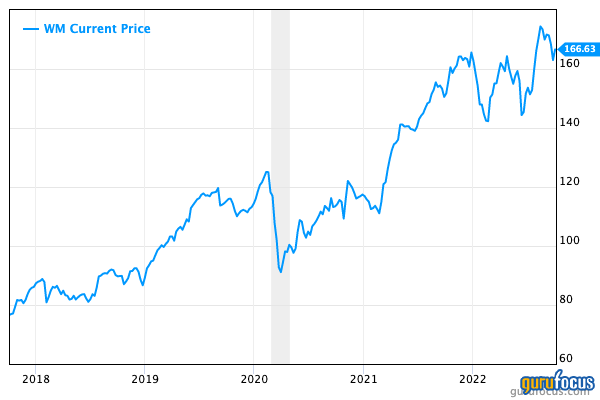 RSG, Financial) handle over 50% of all garbage collection in the United States.

Part of the business's 2022 rebrand also includes changing their name from Waste Management to a simple “WM." The business sponsored the Phonenix Open and is even featured in the Walt Disney (

WM generated solid financial results for the second quarter of 2022. Revenue was a staggering $5 billion, which beat analyst estimates by $184 million. 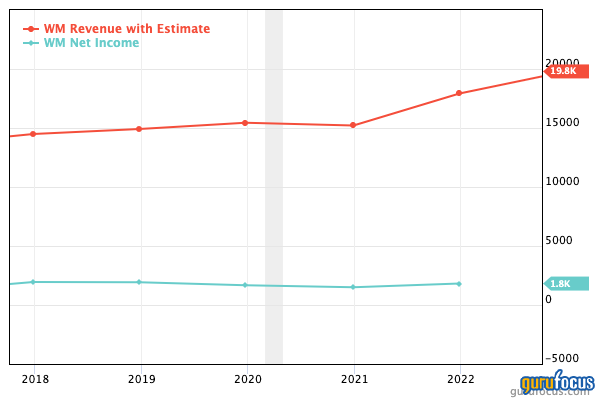 The company generated solid earnings per share of $1.41, which beat analyst estimates by $0.05.

WM also has a solid balance sheet with $894 million in cash and short term investments. Its debt level is fairly high at $14.3 billion, but just $231 million of that is short-term debt (due within the next two years) and is thus manageable.

In addition, people continue to dispose of garbage daily, so WM’s customer base is extremely consistent and recurring. This also makes the stock an ideal recession-proof business.

WM trades at a price-earnings ratio of 29, which is 9% higher than its five-year average, after the recent bull run since 2020. However, the GF Value chart indicates a fair value of $157 per share for the stock, which means the stock is fairly valued at the time of writing. 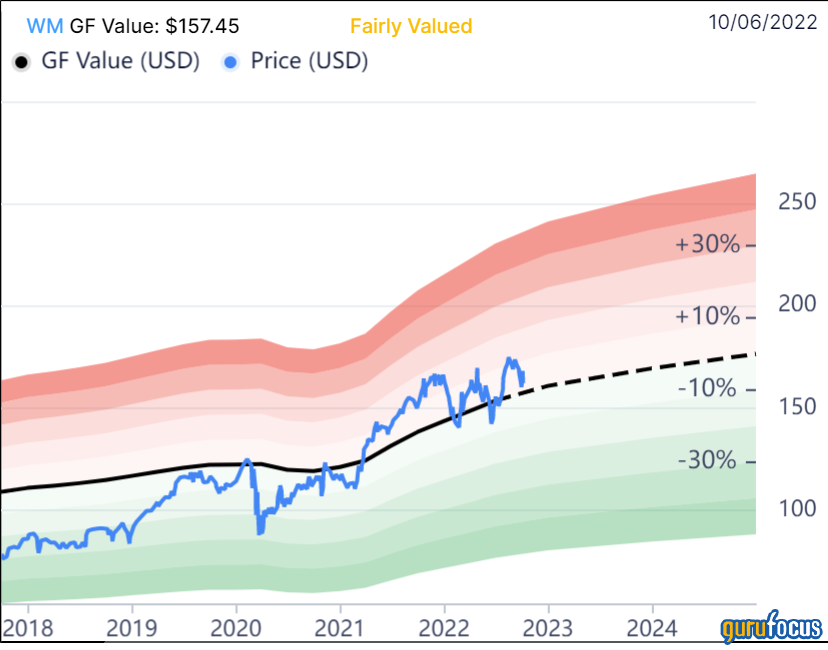 SCI, Financial) is the largest provider of funeral and cemetery services in North America. The business was founded in 1962 and Lynch actually invested in the stock during the 1980s. In his best-selling book “One Up on Wall Street," Lynch states this is "my all-time favorite stock pick” in a “depressing” industry. Based in Houston, the business started to buy up local funeral homes from “mom and pop” owners, and Lynch states the business became a sort of “McBurial" chain.

Lynch highlighted that if you had invested $980 (the cost of a traditional burial) in the stock in 1969, you would have had $14,353 by 1987. If you invested $10,000, you would have made a $137,000 gain. Lynch believes part of this success came from the fact that “not a single analyst” paid the slightest attention to the stock for a decade. Part of this is because the business doesn’t fall under any specific industry category.

If you invested into Service Corp. when Peter Lynch's book was released in 1989 and held the stock to today, you would have made 10 times your money, which is astonishing. From the 2020 lows to mid 2022, the stock racked up a gain of 72%. Therefore, it looks like this favorite of Lynch's is still doing extremely well. 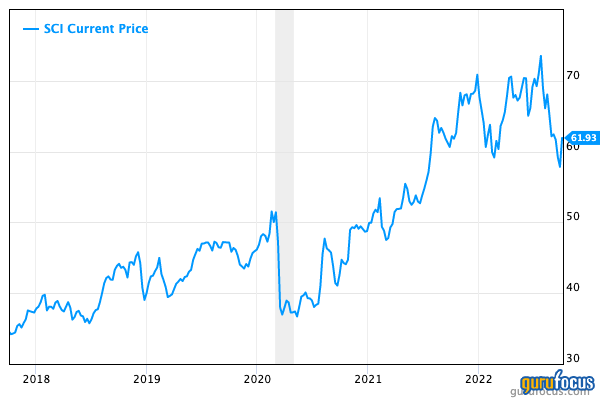 Its business focuses on a high-touch personalized service and its cemeteries have high barriers to entry due to capital requirements and permitting. Service Corp. has also rolled out a direct cremation service to target the price-sensitive consumer.

Service Corp. generated solid financial results for the second quarter of 2022. Its revenue was $990.86 million, which beat analyst estimates by $42.9 million.
The business generated earnings per share of $0.82, which beat analyst estimates by $0.03 per share. To put things into perspective, earnings per share have grown by 45% since 2020 and 79% since 2019. 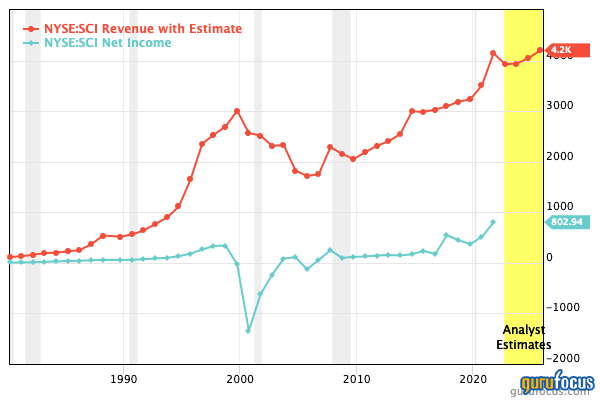 The company is expecting between 5% and 7% organic revenue growth and is reinvesting 3% to 5% back into the business in the form of share repurchases, debt management and growth capital. Moving forward, the company expects 8% to 12% earnings growth, which complies with historic levels that have been very consistent.

Service Corp. has $206 million in cash and cash equivalents as of the second quarter of 2022. In addition, the business has $3.8 billion in long term debt, although just $63.2 million in short term debt (due within the next two years).

Service Corp. trades at a price-earnings ratio of 17.94, which is 15% cheaper than its five-year average. The GF Value calculator also indicates a value of $66 per share and thus the stock is “fairly valued” at the time of writing. 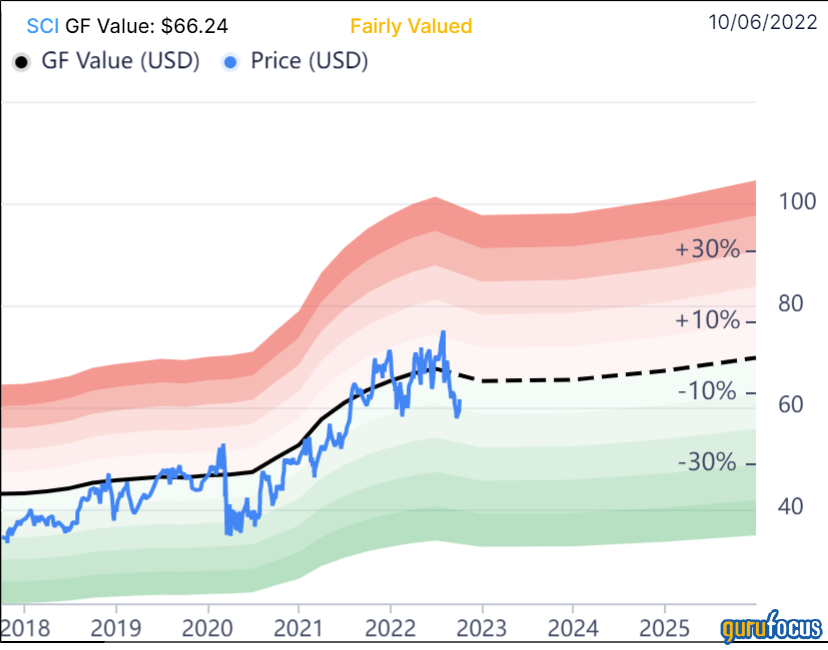 Peter Lynch is a true legend of the investing game who dominated the market during the 1980s. His investing advice is still extremely relevant today, and some of his favorite “unpopular” stocks are still generating strong returns for investors. This makes complete sense as human psychology has not changed. People are generally not interested in funerals and garbage, thus opportunities are apparent for those investors who can look beyond the superficial.