Why Michael Burry Is Wrong About Tesla

Tesla is not the guru's favorite company

Michael Burry, who rose to fame in the aftermath of the global financial crisis for shorting the housing market and profiting more than $100 million for himself and $700 million for his clients, tweeted in September that he should have been short Tesla Inc. (

TSLA, Financial) shares. Taking to Twitter (TWTR) to share the news that a Tesla Megapack has caught fire in a storage facility in California, Burry tweeted, "If I am tweeting this you can bet I am not short it. But I should be."

This is not the first time the guru has taken a jab at Tesla. In a since-deleted tweet last April, Burry wrote, "The competition came for Netflix (NFLX) just like the competition is coming for Tesla."

Back in December 2020, Burry claimed in a tweet that he was short Tesla. Later in May 2021, an SEC filing did indeed show that the guru owned put options to sell 800,100 shares of Tesla worth more than $530 million at the time. Later that year, Burry confirmed that he exited the Tesla short trade and claimed that he did not intend to hold on to that position for a long period of time in the first place.

Yet, I find myself disagreeing with Burry on this one, and based on Tesla's current share price, it seems there are many who agree with me. While Burry dislikes the stock, he clearly doesn't have the confidence to short it in the long-term. Tesla faces many challenges, but the company seems to be enjoying meaningful competitive advantages over its peers that could persist for many years to come.

The electric vehicle industry has a long runway for growth

The United States, as of 2021, was among the few developed countries that were slow to embrace electric vehicles, but things have taken a dramatic change this year. In the second quarter, EV sales in the U.S. registered a staggering 66.4% year-over-year growth while all new vehicle sales declined more than 20% compared to the second quarter of 2021. In Q2, 12.6% of new vehicles sold were electrified (EVs, hybrid vehicles, plug-in hybrid vehicles or fuel-cell powered vehicles) in comparison to just 8.9% in the corresponding quarter last year.

There are many reasons to believe that this is just the beginning phase of growth for the EV industry on a global scale:

With a long runway for growth, the EV industry offers every automaker who can produce a solid product at a competitive price an opportunity to book handsome returns in the coming years.

Brand loyalty can go a long way in helping any company earn sustainable economic profits. Today, Tesla is earning the trust of customers and is quickly building a loyal base of followers who are likely to own Tesla vehicles for decades. As illustrated below, the latest data from S&P Global (

SPGI, Financial) published in June reveals Tesla enjoys the highest brand loyalty among all automakers in the United States. 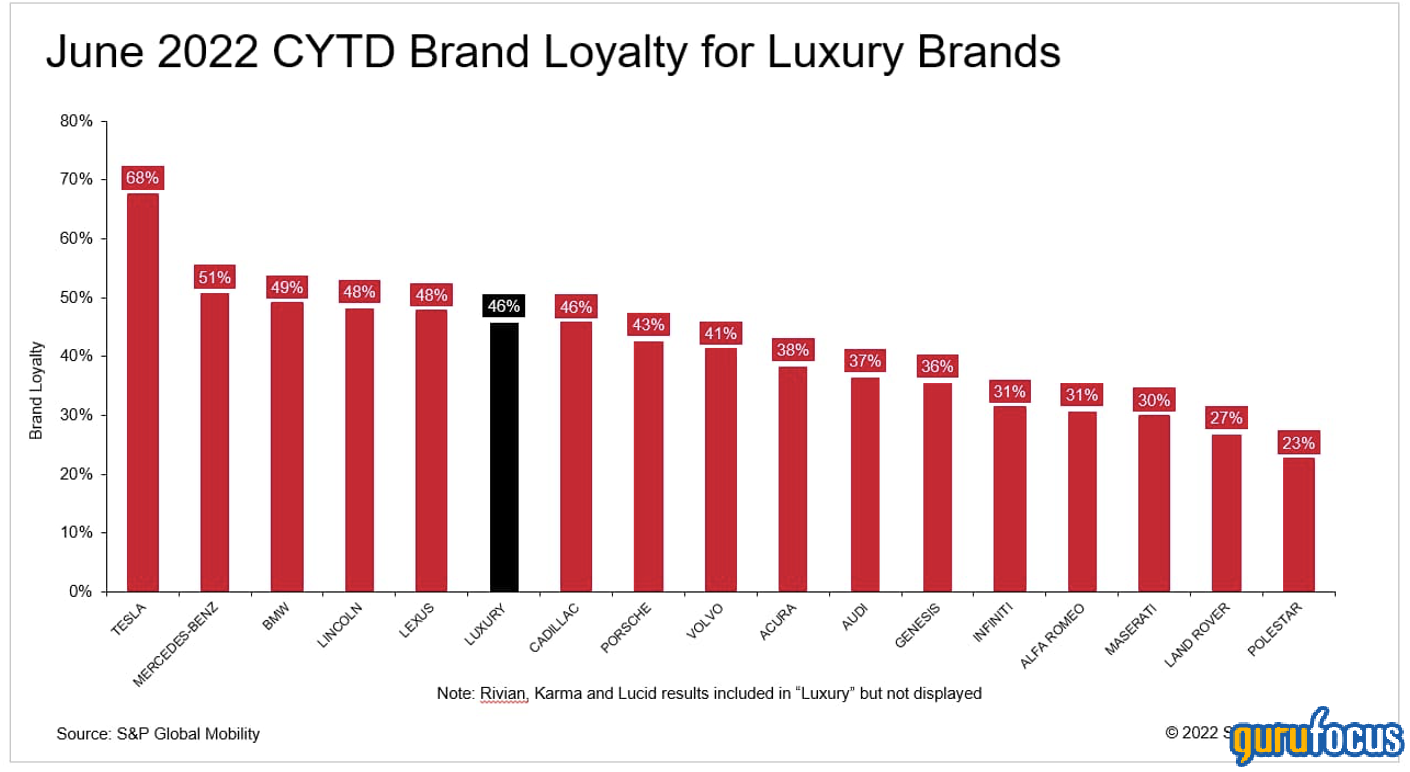 Tesla is also emerging as a favorite among luxury car shoppers, which is evident from the fact that Tesla accounted for the largest market share of the luxury vehicle category at the end of Q2. 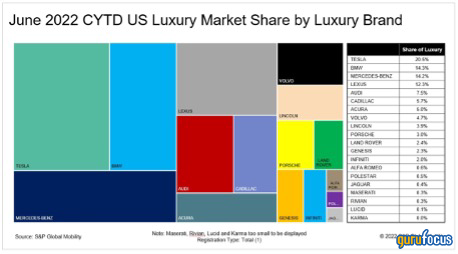 Tesla’s rise as a luxury vehicle brand has reached a pinnacle and the company continues to build its follower base, both of which are early signs of long-lasting competitive advantages.

Profitability is no longer a myth

A few years ago, many analysts and investors thought Tesla will find it difficult to ever break through to profitability as the company invested aggressively to achieve its innovation objectives. These investments, however, seem to be delivering the goods today as Tesla’s industry-leading technological advancements have resulted in stellar bottom-line growth.

Tesla first became profitable (on a fiscal year basis) in 2020, when the company brought in $862 million in net income. Last year, the company reported a net profit of more than $5.6 billion, which is a clear indication that the company is finally converting higher sales into profits. This is a very good sign for long-term-oriented investors as many growth companies find it difficult to scale profitably, which is no longer a concern for Tesla.

Rising competition is a challenge, but Tesla can still thrive

With legacy automakers such as Ford and General Motors finally embracing electric vehicles, Tesla is facing meaningful competition in its home market for the first time since its inception. Although increasing competition could exert pressure on the company’s profit margins, the long growth ahead for the EV industry should present growth opportunities for both Tesla and its peers in abundance. Also, increasing brand loyalty for Tesla and its dominance in the luxury vehicle market suggest the company can withstand the threat of competition and grow.

Michael Burry has yet again come to the spotlight for his comments on Tesla as the company continues to face challenges along with other automakers because of macroeconomic headwinds, geopolitical tensions, rising inflation and supply chain bottlenecks. However, I believe Tesla seems well-positioned to grow in the long run as it builds on its first-mover advantages.