Is Abcam the Perfect Nasdaq Stock?

A great 'pick and shovel' play within the biotechnology sector

ABCM, Financial) is a $3.8 billion market cap biotechnology stock on the Nasdaq Global Select Market. It is moving its primary listing from London’s AIM (previously known as the Alternative Investment Market) and will cancel its AIM shares on 13 December 2022 following shareholder approval given last week.

As an innovator in reagents and tools, Abcam's purpose is to serve life science researchers globally to achieve their mission faster. Providing the research and clinical communities with tools and scientific support, the Company offers highly validated antibodies, assays and other research tools to address important targets in critical biological pathways.

Already a pioneer in data sharing and ecommerce in the life sciences, Abcam's ambition is to be the most influential company in life sciences by helping advance global understanding of biology and causes of disease, which, in turn, will drive new treatments and improved health.

Abcam's worldwide customer base of approximately 750,000 life science researchers uses Abcam's antibodies, reagents, biomarkers and assays. By actively listening to and collaborating with these researchers, the Company continuously advances its portfolio to address their needs. A transparent program of customer reviews and datasheets, combined with industry-leading validation initiatives, gives researchers increased confidence in their results.

Founded in 1998 and headquartered in Cambridge, UK, the Company has served customers in more than 130 countries.

This proposed listing change will make it possible for Abcam to attract more investors to our global business. With the change, we see a path to creating value by increasing stock trading liquidity for our current and potential shareholders. We are grateful to have the support from current shareholders for our proposal and look forward to attracting new life science investors to the Abcam story. 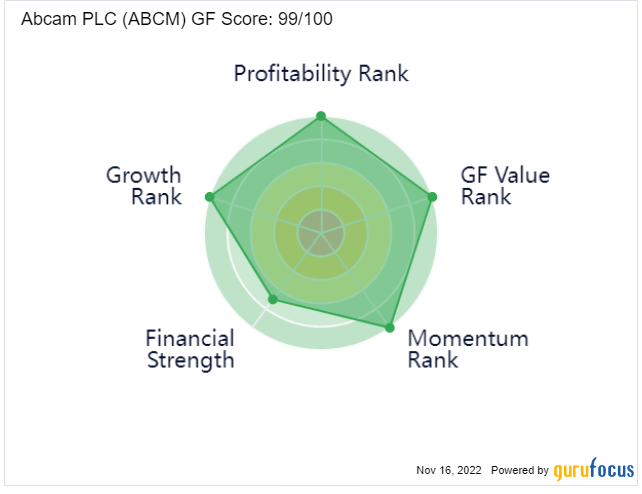 The stock scores 10/10 in the Profitability Rank, the Growth Rank and the GF Value Rank (GV Value: Modestly Undervalued). 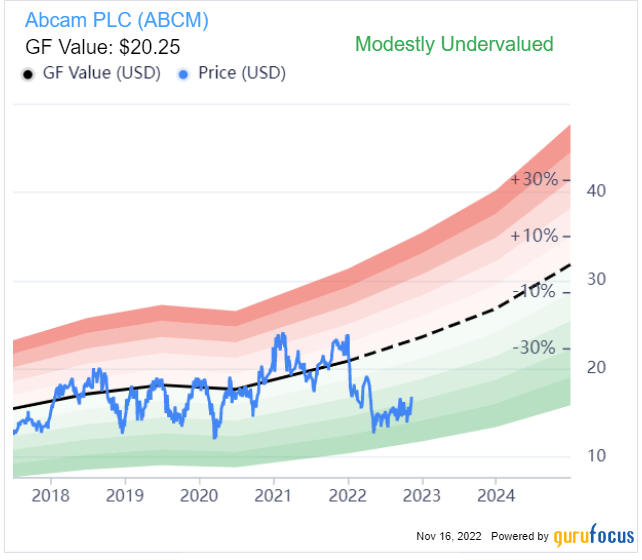 Abcam only scores 7/10 for Financial Strength. It has an extremely safe Altman Z-Score of 34, but only a fairly good Piotroski F-Score of 6 our of 9. Where it is let down on the Piotroski F-Score is from where it doesn’t tick the higher Return on Assets year on year, less shares outstanding year on year, and higher asset turnover year on year boxes. Apart from this Abcam scores so well quantitatively.

99/100 on the GF Score indicates the highest outperformance potential.

Valuation Guru Aswath Damodaran has said previously that a good investment needs to stack up quantitatively and qualitatively, that’s to say the numbers and the story are both attractive.

The stock has fallen about 17% in the last year. That’s because investors in London have moved to risk-off mode and demanded a higher cost of capital from biotechnology. This is partly the reason for the Nasdaq move, where the investor base has more appetite for biotechnology and can therefore give it a higher valuation.

Abcam isn’t going to radically change its business though. The lower cost of capital from a US primary listing can help offset a cost that has developed from the huge bottleneck that has developed in the UK’s biotech sector. There is almost no laboratory space available for rent in Oxford and Cambridge – two of the hubs in the country’s so-called ‘golden triangle’ of pharmaceutical innovation (the other being London) – so landlords have been raising rents. UK biotech is based in Oxford, Cambridge and London to tap the leading universities for talent and research and development.

So Abcam is going to continue developing its expertise in an emergent and increasingly profitable field of biological analysis out of Cambridge and is set to become a globally important firm in the space.

Abcam is not a pharmaceutical company performing costly and risky drug development. It is focused on identifying, developing and distributing research-use-only antibodies, which are used by academics in biomedical research and by drug development companies. More than half of all life science research papers published in 2020 cited the use of one of the company’s products. So you could say it’s a “pick and shovel” type stock within the Pharmaceuticals and Biotechnology sector.

Abcam has been one of the great success stories of the speculative junior market that is London’s AIM. Its move to the Nasdaq shows that it is now a serious company, and it remains an exciting growth prospect.

The research-use-only antibodies are not just used in research because their use in diagnostics and other applications is growing, so Abcam has a lot of new markets for future growth.

An example is proteomics, for the large-scale study of groups of proteins to help diagnose and treat disease. Proteins have the potential to provide a “real-time” insight into patient health and disease characteristics. The antibodies that Abcam make are the ingredients needed for this process.

Heart disease is a prime example for the opportunity to use proteomics technology, as this diagnostic tool is well suited to diseases that aren’t driven purely by genetics.

According to broker SVB:

Proteomics represents a large $75 billion market opportunity in life science tools and diagnostics, in our view, with $20B in research today and $55B emerging in diagnostics and personalized medicine.

Analyst estimates for Abcam provided by GuruFocus show revenue growing from $446 million this year to $715 million by 2025. So clearly, Abcam has a huge total addressable market still to play for. Management has said that as an early leader in proteomics it can grow at a rate of “two to three times” the underlying market.

In terms of margin growth, Abcam this will be driven by expanding sales of the antibodies it makes in house (it also markets third-party products which have a lower gross margin). At Abcam’s full-year results back in March, management said they anticipated continued improvement in gross margins due in part to last year’s $340 million acquisition of BioVision, which was a competitor distributor of life science research tools.

With revenue growth and efficiency gains, and the Abcam expects the adjusted operating profit margin to exceed 30% in 2024, from 19.2% in 2021.

Abcam reported an encouraging trading update in July which indicates to me that operating efficiencies should start to be realised soon, followed by higher margins. Management forecast organic growth of around 16% for the full financial year, thanks to a higher contribution from its higher-margin products.

Although it has been a tough year for biopharma stocks, Abcam's strong numbers, differentiated story and huge market opportunity, along with the catalyst of the Nasdaq move make me very bullish on this stock.