Can Shopify Break Through the Bear Market Barricade?

SHOP, Financial) has had a tough 2022, but things are starting to look up. After seeing booming growth during the early months of the pandemic as small business rushed to move online, the company has been suffering from the poor economic situation this year. However, the third quarter earnings results saw some improvement, with higher-than-expected revenue and gross merchandise value growth. Additionally, the loss per share was less than expected. All in all, I believe Shopify has what it takes to break through the bear market and come out intact on the other side, which could make it undervalued at current levels.

The company is undeniably facing some significant headwinds. Firstly, macroeconomic conditions are continuing to deteriorate, with growth slowing in key markets such as the United States and China. This puts pressure on Shopify's margins, as it is harder for businesses to justify spending on Shopify's platform when their sales are under pressure.

These reasons are why Shopify is in murky waters right now, but the long-term outlook is still good. E-commerce is still rapidly growing in the global sphere, and Shopify is diversifying and streamlining its business operations to take advantage of more opportunities.

The stock has also fallen into value territory according to the GF Value chart, though the algorithm does warn of a possible value trap due to declining fundamentals alongside the declining share price: 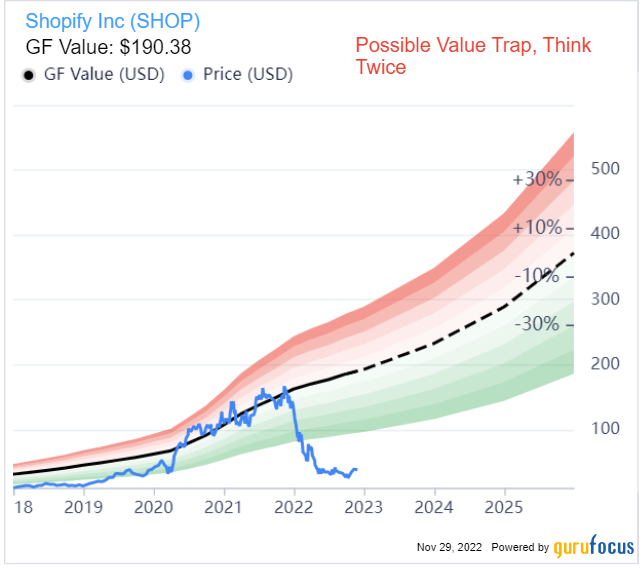 Shopify is hitting the right notes in a difficult economy

While some investors may be concerned about the recent stock market pullback and economic troubles, there is no reason to be bearish on Shopify in my opinion. The company continues to show strong growth, evidenced by its Black Friday sales figures.

Adobe Analytics data reveals that the Black Friday and Cyber Monday weekend sales made up $9.12 billion in revenue, a 2.3% increase from last year, notching growth even though it failed to keep pace with inflation. Online sales of Cyber Monday are expected to reach $11.2 billion, a jump of 5.1%.

Shopify had a smashing success in its Black Friday sales as it reported sales of $3.36 billion over the one-day shopping holiday. The figure represents the sales from the start of the day in New Zealand to the day ending in California. Harley Finkelstein, president of Shopify, boasted about the company setting a sales record. He noted that the company's most popular categories were apparel and accessories, health and beauty products and home goods. Following the good news, shares increased in pre-market trading on Monday.

These results show that Shopify is successfully attracting more customers than the general market. Given the overall strength of the economy, it is unlikely that Shopify will continue to perform "well" in the quarters ahead, though it might do better than brick-and-mortar retailers. This mainly bodes well for the long-term growth of the company.

Shopify is expanding into new business areas and geographic regions

Shopify provided investors with several reasons to cheer in its third quarter earnings report. It recorded $1.4 billion in revenue for the quarter, a 22% increase over last year. Subscription Solutions and Merchant Solutions revenue increased by 12% and 26%, respectively. Shopify is becoming increasingly popular and is one of the best strategies for retail e-commerce customers. Monthly recurring revenue was $107 million, an 8% increase thanks to Shopify Plus' contribution of $35 million.

Not only did the revenue surpass estimates by $30 million, but Shopify also beat analysts' loss per share estimates of 7 cents per share by reporting a loss per share of just 2 cents. The gross merchandise volume was $46.2 billion, up 11%, and 54% of the orders were processed through Shopify Payments, raising the gross payments volume to $25 billion.

Shopify Fulfillment Network has been a game changer for the company as it saw an 80% sequential increase in merchants utilizing at least one logistics service. The company saw growth of 450% in the number of orders fulfilled from last year to this year. Cross-docks rose 75% over the same period, with more merchants getting an opportunity to distribute their goods through Deliverr's cross-dock network.

Thanks to its acquisition of Deliverr, Shopify can now offer even more value to its merchants by providing them with access to fast and reliable fulfillment services.

Shopify also launched Shopify Markets Pro, expanded Shopify Payments to four new countries, introduced Shopify Capital in Australia and started operating Shopify POS in Singapore and Finland. These developments have contributed to the company's strong growth, with Shopify's merchant solutions attach rate increasing to 2.14%. With the holiday shopping season just around the corner, Shopify is well-positioned to continue its momentum and drive even more growth in the quarters ahead.

While all this is encouraging, I want to emphasize that there were some negatives. R&D and administrative costs, for example, increased by about 43%. But that should not dampen the faith of those who believe in the company's long-term prospects, as it represents spending for future growth.

The e-commerce industry is booming and is expected to grow in the coming years, rising from $3.3 trillion to $5.4 trillion by 2026, according to Morgan Stanley (

MS, Financial). Shopify is a leading player in this industry and is well-positioned to continue to grow along with it. Shopify has a strong platform and a growing customer base and is investing in many initiatives to help it continue gaining market share.