Amazon and Microsoft have the biggest cloud businesses in the US

The cloud industry has been a hot topic in tech news in recent years. For those who are unfamiliar with the concept, the cloud is basically a datacenter or external server which is used to provide a service. Historically, large organizations hosted all their IT applications on-premesis, which means that when they wanted to scale their data operations, they would need to purchase expensive hardware upfront and wait for installation, which can take time. The cloud solves this problem as a business can effectively outsource all of its data to an external datacenter managed by another company.

This has many benefites, which include increased flexibility and potentially lower costs as the hardware required can scale with demand. Therefore, it is not a surprise that the cloud industry was valued at $430 billion in 2021 and is forecasted to grow at a rapid 15.8% compounded annual growth rate to reach over $1 trillion by 2028, according to a report from Facts and Factors.

Thus, in this discussion, let's take a look at the two tech giants that are leading the charge in the cloud industry, Amazon.com Inc. (

AMZN, Financial) is not just the largest e-commerce company in the U.S., it has also become the country's largest cloud infrastructure provider with its Amazon Web Services business. This was a business that was founded 2002 and re-launched 2006. It was one of Amazon’s “big bets” which paid off massively. AWS operated in a covert manner during its initial years of operation before surfacing like a whale from the ocean. This shocked competitors, who were left playing catch-up.

AWS was headed by the now CEO of Amazon, Andy Jassy, and has continued be the fastest-growing part of Amazon’s business. AWS has 200 data centers globally, with 96 “availability zones” and 410 points of presence. The company has 30 regions, which include three on the West Coast and four on the East Coast of the U.S. In 2022, the company launched its branch in the United Arab Emirates and is rolling out a branch in Canada soon.

The idea of AWS’s vast infrastructure is to offer organizations that move to the cloud vast redundancy with its operations. For example, if one availability zone goes down due to a natural disaster like an earthquake, then the company has customer data replicated across other zones and can keep their systems online. This is an important point as if a company runs its website from a server at its headquarters, then if that building has a flood in the basement or a fire, then the organization's website would go down.

The vast infrastructure also protects against cybersecurity attacks. For example, a distributed denial of services, or DDoS, attack aims to overload a server with requests. However, this type of attack is virtually impossible with AWS infrastructure as it is so vast.

AWS has developed a platform-based model, which offers organizations a solution for almost every problem they have. This includes everything from traditional compute and storage to artificial intelligence. The business even offers “satellite communications as a service." The vast range of products may seem like overkill, but this means AWS can easily grow or expand its customer accounts and promote greater usage.

The company makes it revenue from a consumption-based pay-as-you-go model. This is extremely appealing to business as it effectively scales with demand. For example, let's say an e-commerce company hosts its website with AWS. During its Black Friday sales event, the server capacity will expand with the vast traffic increase. However, if the company hosted the website with its own hardware, it may need to upgrade.

The cloud is driving Amazon's growth

In the third quarter of 2022, AWS continued to grow, reporting sales of $20.5 billion, which increased by 28% year over year. This business segment has an outstanding annulized revenue run rate of $82 billion.

I would argue that AWS effectively carries Amazon’s core e-commerce business. While it makes up only 15% of the company's $127 billion in net sales, it is the most profitable part of Amazon with $5.4 billion in operating income generated, up 11% year over year. To put things into perspective, Amazon’s total business reported lower operating income of $2.5 billion. This was driven by a large amount of expenses ($124 billion), which increased by 18% year over year. This was further driven by a 10% increase in fulfillment costs to $20.5 billion and cost of sales of over $70 billion. 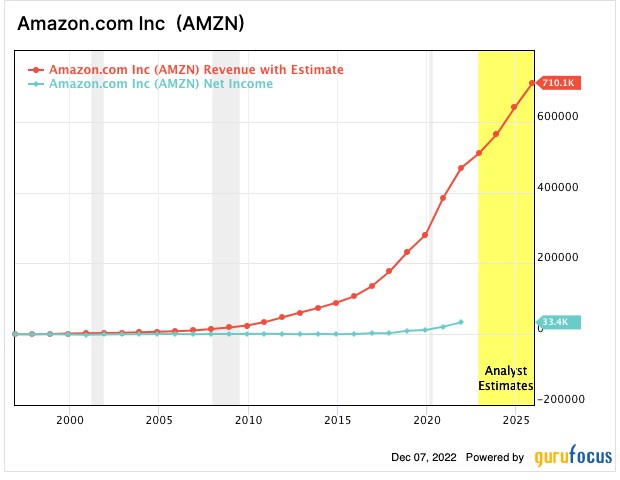 Amazon trades with a price-sales ratio of 1.76, which is 46% cheaper than its five-year average.

In addition, the stock has a GF Value of $193 per share, which means the stock is significantly undervalued at the time of writing based on its historical ratios, past financial performance and analysts' future earnings projections.. 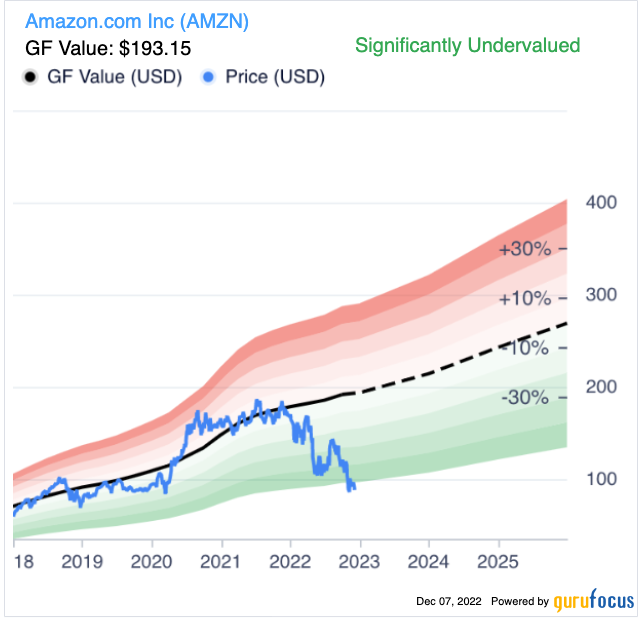 MSFT, Financial) owns the second-largest cloud infrastructure provider in the U.S., which is called Azure. Despite being late out of the starting blocks against Amazon, Microsoft has built up a formidable presence and is leaving the third industry player, Alphabet Inc.'s (GOOG, Financial) Google Cloud, substantially behind.

Azure has been popular with many organizations because its setup uses technology that customers are already familiar with. This includes Windowns, Linux and Active Directory. In contrast, AWS can be more complex for some organizations and requires specialist skills. A review by Spiceworks also indicates Azure has a "smoother user interface" when compared to AWS.

Microsoft Azure is also a great option for companies that are taking a hybrid cloud approach. This means companies opt to keep some of their IT needs onsite for data, security or legacy technology reasons and move some workloads to the cloud.

According to a study in Cisco’s 2022 Global Hybrid Cloud Hournal, 82% of decision-makers are adopting a hybrid cloud strategy. Therefore, Microsoft could be poised to benefit.

For the first quarter of fiscal 2023, Microsoft reported over $50 billion in revenue, which beat analysts' estimates by $435 million and increased a solid 11% year over year. The results were driven by strong growth across all business segments. 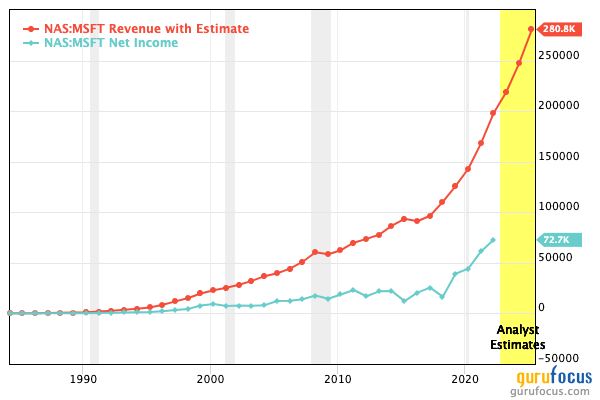 Its cloud segment also posted a strong performance, generating $25 billion in revenue, which increased by 24% over year over. In comparison, AWS reported $20.5 billion in the prior quarter. Therefore, it looks as though Microsoft may actually be slightly ahead (at least for this quarter) despite market share reports.

Microsoft trades with a price-earnings ratio of 25.6, which is 16% cheaper than its five-year average. 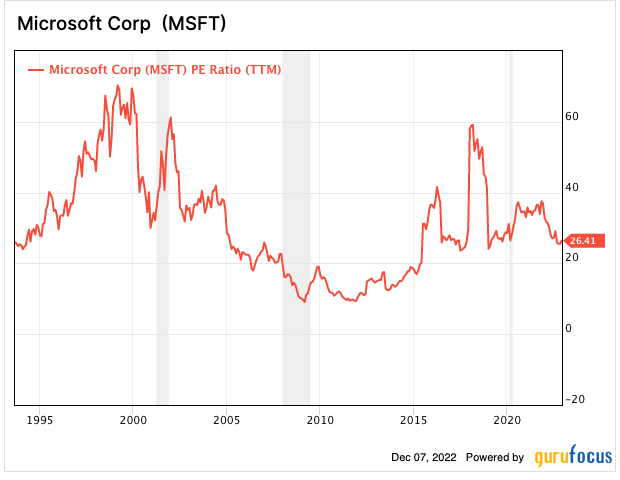 The GF Value Line also indicates a fair value of $312 per share, which means the stock is modestly undervalued currently. 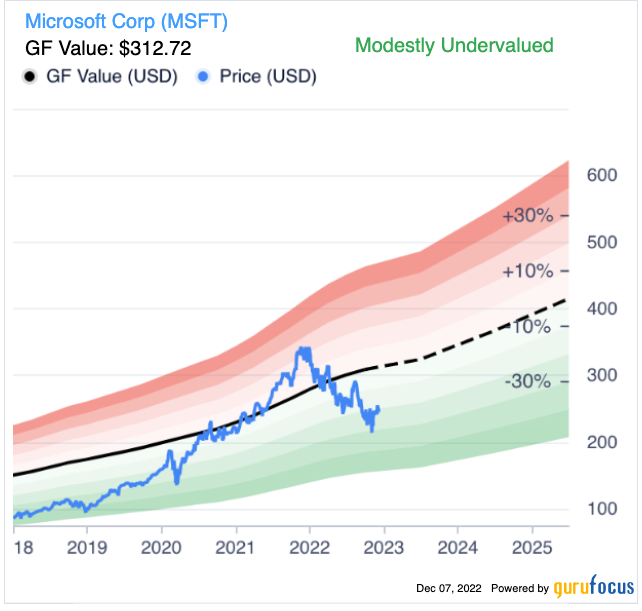 Amazon and Microsoft are kings of the cloud as both AWS and Azure are growing rapidly and driving huge profits. The two companies also have strong market positions outside of the cloud industry, indicating they could be great long-term investments.