Why Jeremy Grantham Believes We're Not In a Bubble...Yet 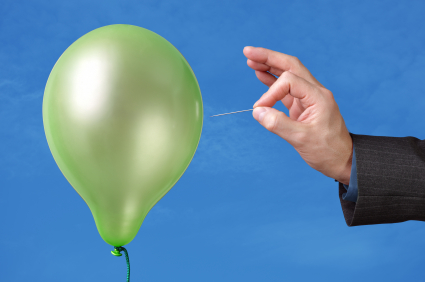 With the Shiller P/E ratio nearing all-time highs, many famous investors have expressed concerns that we are in a new stock market bubble.

For those who need a primer, Robert Shiller of Yale University invented the Shiller P/E to measure the market's valuation. His valuation metric is believed to be a more reasonable market valuation indicator than the P/E ratio because it eliminates fluctuation of the ratio caused by the variation of profit margins during business cycles.

For example, it uses the average annual earnings of the S&P 500 companies over the past 10 years, adjusting past earnings for inflation. This smooths out the earnings curve for short-term fluctuations in profits.

At current levels, the Shiller P/E is higher than almost every other stock market bubble in history, barring the dot-com crisis.

Why does this matter? If you assume that valuations revert to their mean over the long-term, the Shiller P/E is actually a helpful, if not perfect predictor of future stock market returns.

If we assume that the current Shiller P/E reverts to its historical mean, the future market return will be around -0.6% a year. At best (150% of the mean), the Shiller P/E predicts that markets will only return about 4.3% a year. Below is a table showing some possible outcomes:

The latest bubble, however, has largely been attributed to the Feds actions.

Jeremy Grantham (Trades, Portfolio) of GMO believes its logical to assume that absent a major international economic accident, the current Fed is bound and determined to continue stimulating asset prices until we once again have a fully-fledged bubble.

Importantly however, he doesnt believe we are there yet.

GMO believes that bubble territory for the S&P 500 is about 2250 (which is a two-sigma even based on their models). While its not perfect, quantitatively identifying a bubble as a two-sigma deviation has proven quite useful in their historical searches for market bubbles.

There are a few factors that Grantham believes will help continue pushing price levels towards eventual bubble levels.

For example, there is still available labor hiding in the participation rate. In recent years the female participation rate has pulled back while in other developed economies it has continued to increase. The U.S. is now well behind the average of the other 22 developed countries.

There is also room for an increase in capital spending. Although it has rebounded, the current capex to GDP ratio is still incredibly depressed compared to any other time in history. Any sustained revival could have considerable effects on the economy.

Grantham also believes that lower oil price should also have more of a stimulus effect for the U.S. as time passes. Others seem to agree.

Citigroup previously estimated that if oil went to $80 (prices are currently around $55), it would lead to $1.8 billion in economic stimulus every day, or $660 billion every year. In a call with reporters, Morse said if this drop in oil stays where it is and gets filtered through gasoline prices that would effectively be a $600 tax credit to an average American household owning a vehicle.

Since this call, oil has fallen an additional 25%. The ripple effect across consumer pockets may be enough to push stock markets to bubble territory.

It would, in my opinion, be odd to have a Fed-driven cycle end before the economy is working more or less flat out as it was in 1929, 2000, and 2007, to take the three other biggest equity bubbles of the last 100 years. We could easily, of course, have a normal, modest bear market, down 10-20%, given all of the global troubles we have. If we do, then the odds of this super-cycle bull market lasting until the election would go from pretty good to even better. So, 2250, here we come is still my view of the most likely track.

One of the greatest market commentators believes we actually are closing in on a true market bubble. If youre a bull, hopefully the tailwinds we described earlier help sustain what already looks to be an overheated market.