Intel was able to post better-than-expected results due to strong performance from two key segments, Client Computing and Internet of Things, according to CNBC. Internet of Things Group grew by 16% while the Data Center Group, which has a long-term double-digit growth target, only grew by 8%. Client Computing Group, the lead earner in Intel’s portfolio which is dependent on PC sales around the world, posted a better than expected 4% year over year growth to reach $9.1 billion in revenue during the fourth quarter.

Despite the noteworthy performance in 2016, Intel is still in the transition phase, as its revenue mix has yet to cut off reliance on the Client Computing Group.

“We expect Intel’s client computing segment revenues to decline by approximately $1.2 billion over the next five years. The revenue from this segment primarily includes the sales of Intel’s processors in PCs, notebooks, tablets and mobile phones.” - Trefis, September 2016 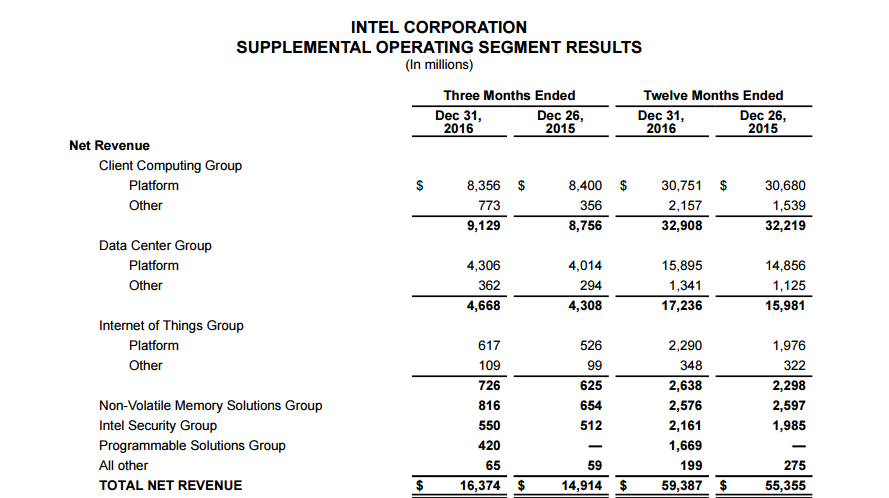 Intel needs the Data Center Group and Internet of Things group to grow to a level from where they both can offset any decline in the core segment, if necessary. In 2016, DCG and IOTG posted combined revenues of $19.874 billion, a full $12 billion less than CCG. Together, these two segments posting high single-digit growth can offer some protection against headwinds faced by CCG, but it’s still not a great position to be in from a long-term perspective.

Intel needs to crank up the pace on DCG, which also happens to the most profitable unit for the company. If this segment starts posting double-digit growth numbers, then Intel would be in a much better position. As such, 2017 will give us a clear indication of how long it will take for us to see the new Intel.

The market knows that despite a solid 7% revenue growth performance from Intel in 2016, the company’s transition is not in clear sight. That’s the reason why it is still trading at nearly 16 times earnings and 3 times sales, while Microsoft (

MSFT, Financial) has a much better valuation despite seeing its revenue decline last year, posting flat growth during the first quarter and strong growth only during the second quarter. In Microsoft’s case, it’s because the transition seems to be near its end, and we are also able to see the path forward. Intel still needs to get there.

Disclosure: I have no positions in the stocks mentioned above and no intention to initiate a position in the next 72 hours.