Thomas Russo: How to Invest in International Consumer Brands

Thomas Russo gave a long and interesting talk at Alphabet (

GOOG, Financial)(GOOGL, Financial). He broke up the talk in three parts:

By taking notes I’ve tried to distill the most important and novel investment lessons. Absolutely watch the whole thing (embedded above) as it is rich in investment examples that bring the concepts he talks about to life.

Russo starts by telling how an early Warren Buffett encounter imprinted on him the knowledge that the only tax break in investing comes through long-term investments. If you want to capture that advantage, you need to be able to hold names for the long term. Russo's portfolio had a turnover of 1.8% last year. That's virtually unheard of.

Russo developed his framework of investment around a capacity to hold for the long term to capture that free lunch. He concluded, at a high level, you need two things in your investments.

Russo likes the consumer brand as a competitive advantage.

”‹To invest in a brand that will expand well globally look for:

Russo’s take on the advantage of brands is very interesting. The way he defines it, it is a very low hurdle. The consumer merely needs to believe there is no substitute.

To insert a counterpoint here I’d say that Bruce Greenwald’s thinking (read Competition Demystified) does argue against competitive advantages based on brands. Greenwald argues the brand is kept alive through advertising. Some brands do succeed (for a time) but if you were to examine all money sunk into brand building, he questions whether the return on investment exceeds the cost of capital.

Russo prefers brands that are leftovers from colonial times. These were products that were distributed and advertised in interesting emerging markets. But they were very expensive. This resulted in highly aspirational brands that still have very good mindshare.

You could argue the costs of this brand building has been expensed in a long gone era. However, the companies still currently benefit from that past. Likely Budweiser and Heineken do not compete on equal terms in some markets. This advantage is not visible on the balance sheet. It could manifest itself in the future as emerging markets continue to develop a middle class and Heineken “magically” captures market share at a lower cost. Greenwald would identify such a competitive advantage as a demand advantage that competitors don’t have access to.

One area where Russo really derives an edge is by analyzing agency costs burdening shareholders. Agency costs materialize where there are conflicts of interest between principals (shareholders) and agents (executives) in an organization. Russo believes most companies face agency costs.

Concentration within top 10 holdings is not unusual among gurus. Most created their track record by betting big when they observe a major opportunity.

Investing in family or founder controlled companies is another value investor tactic that is not unique to Russo although it is not as common as the concentrated investment style. Many investors identify the ability to be able to invest for the long term as a real competitive advantage. Unfortunately, agent operators who are spending money on vanity projects tend to claim long-term benefits as well. In practice, it isn’t always easy to differentiate between the two. Major share ownership does go a long way.

Buffett is the most famous example of an investor who doesn’t like stock options. But it is a widely held view. In most, except for the most egregious cases, the direct costs are sort of negligible. Russo raises the second-order effects of continuous earnings per share management as an interesting secondary costs of this practice. As it only shows up through minor long term value destruction, it is extremely hard to detect without talking to people who work at the company.

To my knowledge, preferring European (brands with colonial history) and multilingual management are unique attributes of an investment style. Of course there are some shops in Europe that prefer European stocks, but that doesn’t really count. Just like its easier to sell U.S. equities in the U.S. it is easier to sell European equities in Europe. 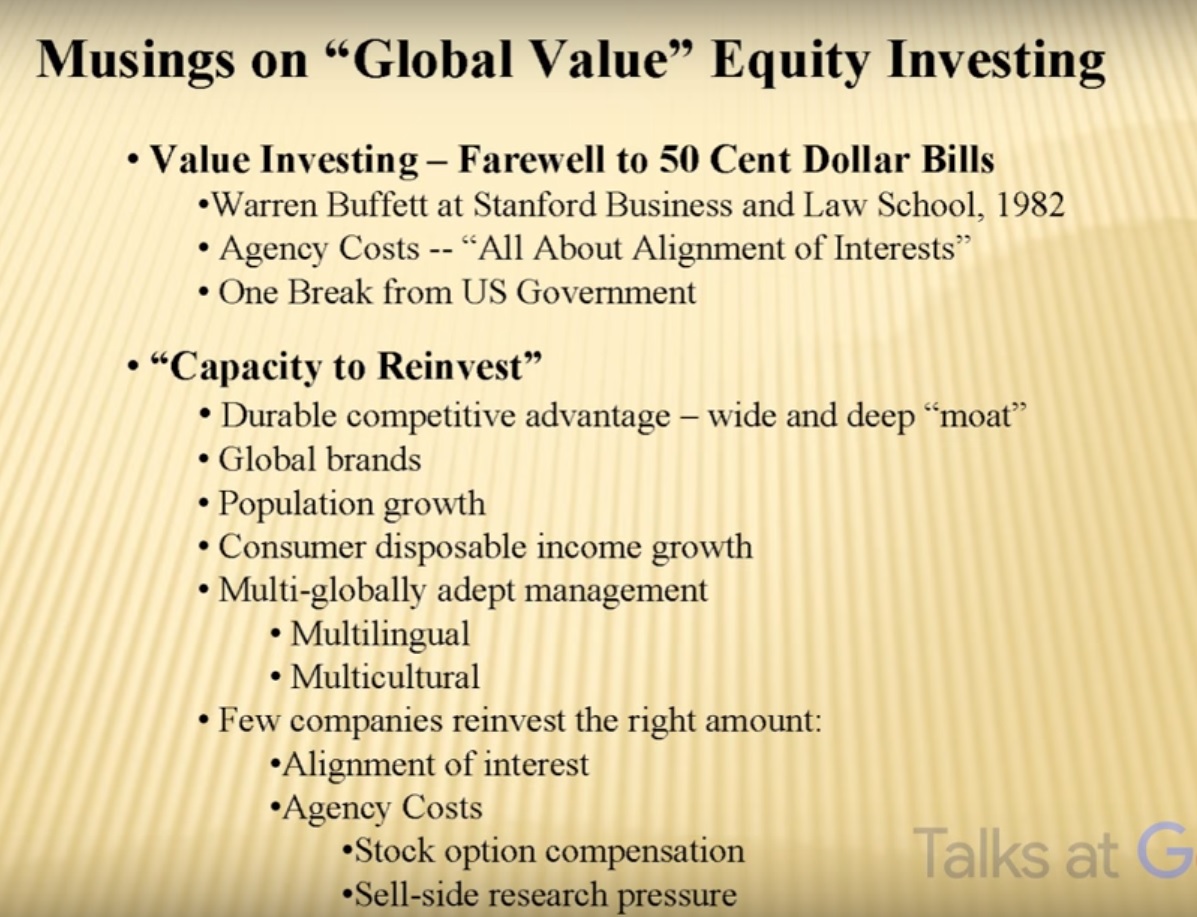 Source: slides from the presentation 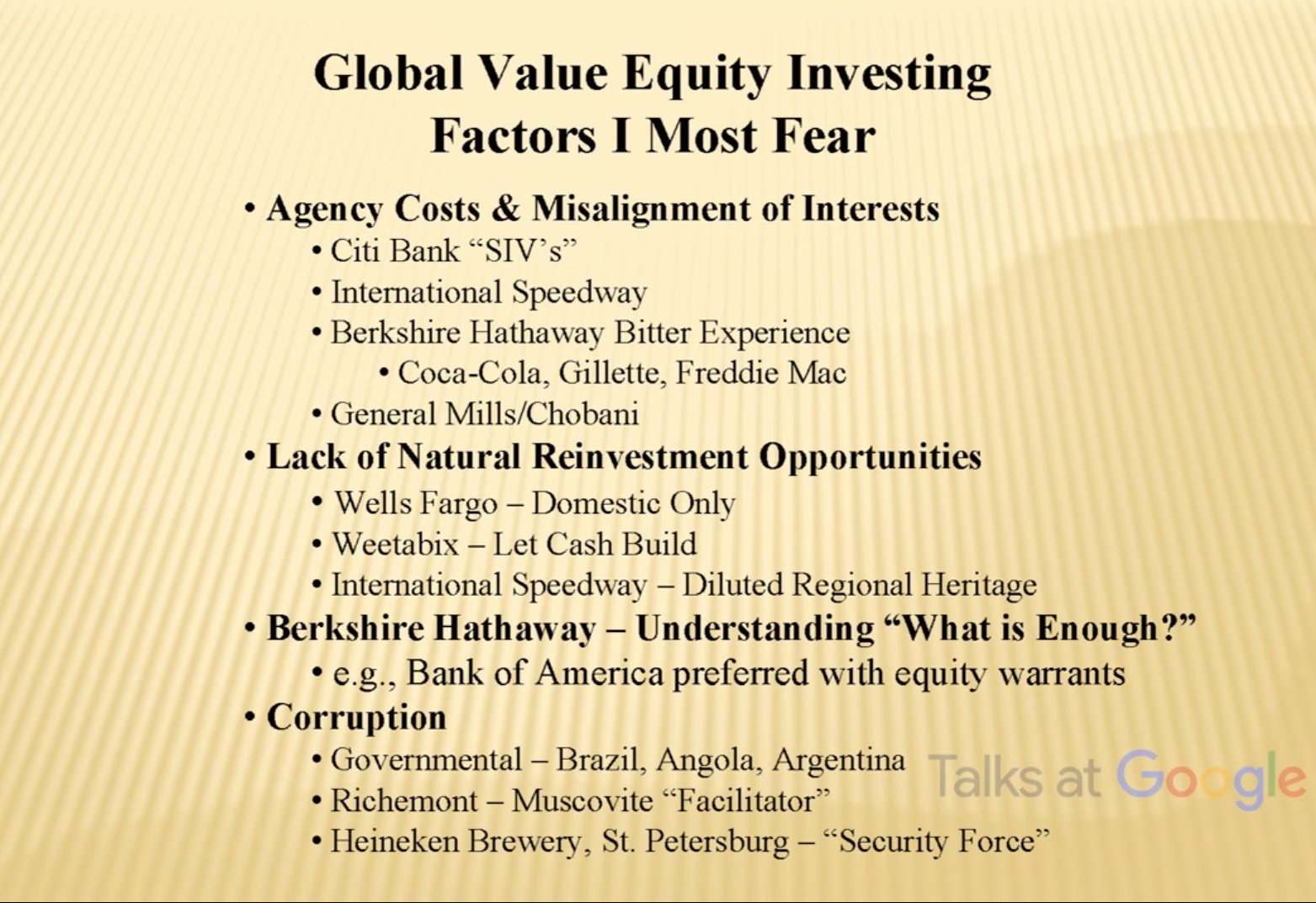 Russo reiterates one of his major fears is really agency costs. If there are misalignments that can kill a long term investment. As an example he talks about Citigroup (

Citigroup underwrote businesses even if there was no market for their bonds. There was no value in the business, but through bad incentives it benefited management.

ISCA, Financial). There accrued some benefit to the family by overbuilding tracks, and this led to the brand getting damaged.

Russo also fears businesses that don’t realize when to stop trying to take more. Berkshire Hathaway is an example of a business that does this very well. The firm tends to leave something for other parties in the transactions they do. This benefits them through secondary effects.

Finally, he is also mindful of portfolio companies dealing with corrupt governments and/or mobsters. This happens in practice and up to a level Russo appears somewhat accepting of the difficulty of doing business in frontier-like markets. At the same time it is a major fear because it can damage a brand or lead to bad results.

Russo talks about many of his investments mistakes both of omission and commission. Maybe he carefully chose them but they didn't sound too bad. His mistakes of ommisson look worse than those of commission. I have a hard time fitting them within Russo's framework, especially if I'm thinking about it retroactively. How did these businesses look early on? Even today I don't think they are exact fits to the perfect Russo pitch. 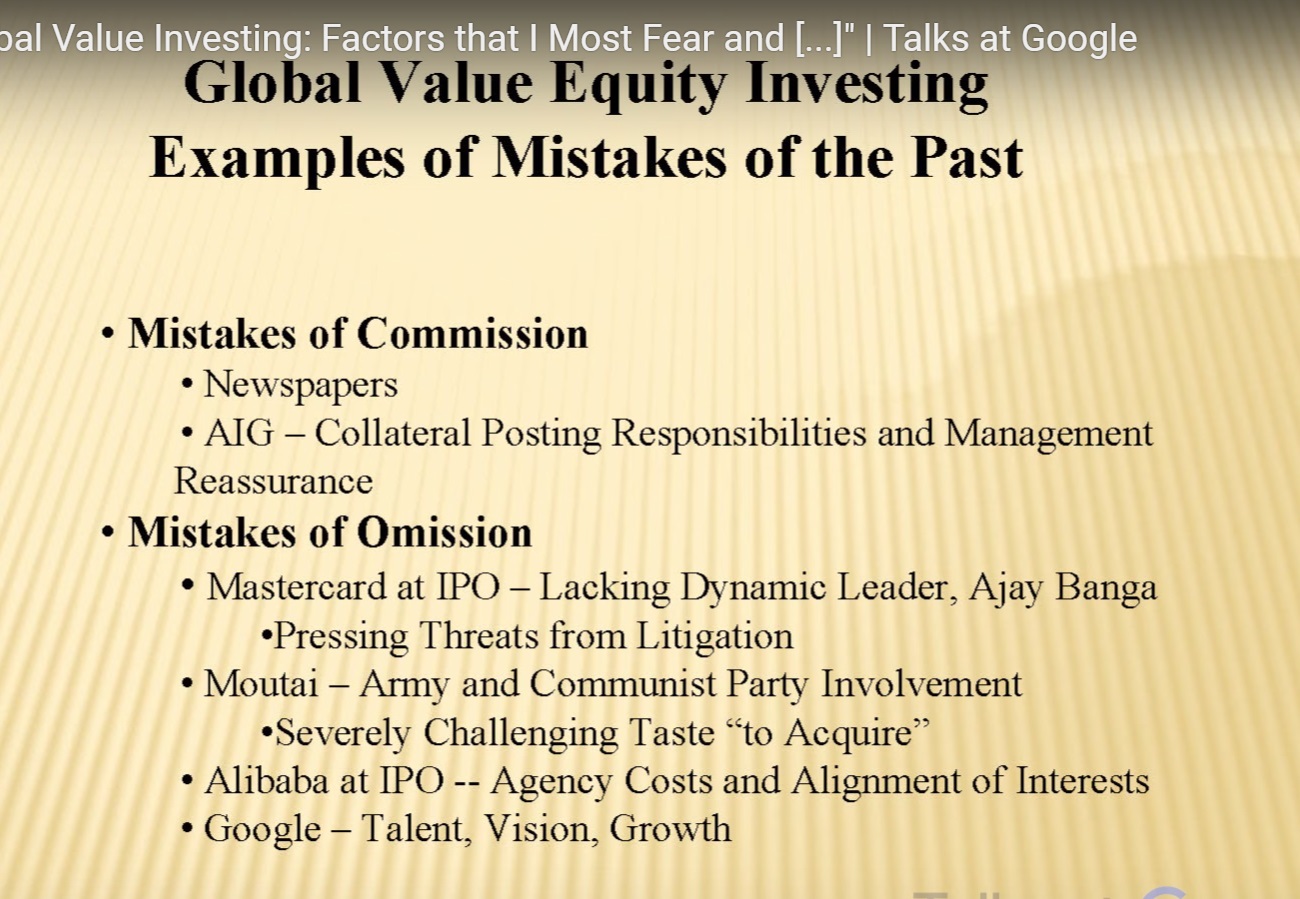 Russo ends his talk with a few “random” notes of advice. He shows a slide of a collection of Buffett and Mungerisms. And emphasizes: 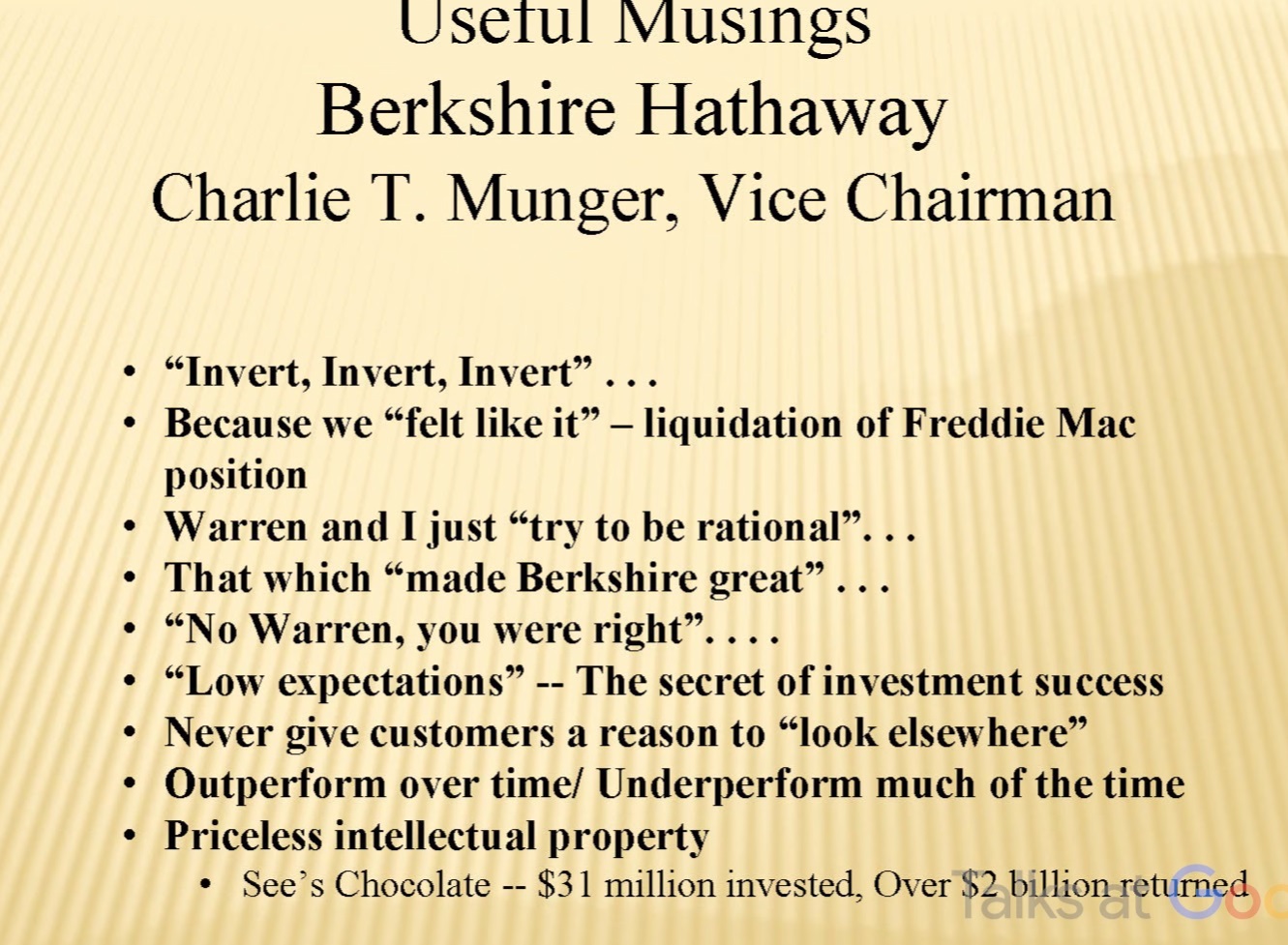 Also check out:
Not a Premium Member of GuruFocus? Sign up for a free 7-day trial here.
Rating: 5 / 5 (3 votes)
8 Comments
Write for GuruFocus
Submit an article
How to use GuruFocus - Tutorials What Is in the GuruFocus Premium Membership? A DIY Guide on How to Invest Using Guru Strategies GuruFocus New Features