Andreas Halvorsen (Trades, Portfolio) disclosed his portfolio for the third quarter in November.

In addition to considering cyclical and secular industry trends, the guru's Connecticut-based hedge fund selects stocks based on its understanding of the business' fundamentals and management team. Halvorsen was a former protégé of Tiger Management's Julian Robertson (Trades, Portfolio).

During the three months ended Sept. 30, the investor entered 25 new positions, exited 17 stocks and added to or trimmed a slew of other existing holdings. His most notable trades included new stakes in Ginkgo Bioworks Holdings Inc. (

Having invested in the company in an initial funding round in 2015, Halvorsen revealed a 302.9 million-share stake in Ginkgo Bioworks (

DNA, Financial), dedicating 9.77% of the equity portfolio to the holding. The stock traded for an average price of $12.17 per share during the quarter.

It is now his largest position. 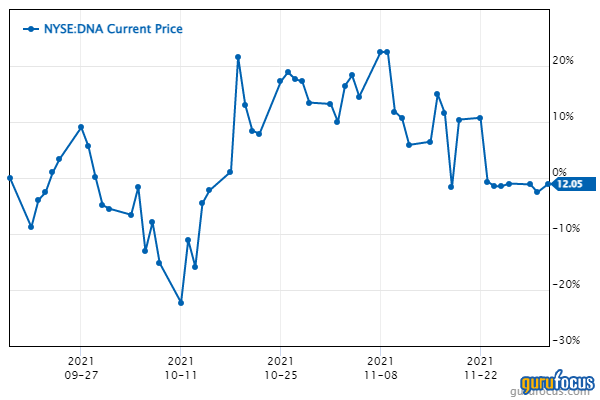 Founded in 2008 by graduates of the Massachusetts Institute of Technology, the company is building a platform that enables the design and growth of organisms that can produce valuable biological products across diverse markets, ranging from cosmetics and agriculture to industrial chemicals and pharmaceuticals.

The guru picked up 2.9 million shares of McDonald’s (

MCD, Financial), allocating 2.01% of the equity portfolio to the position. During the quarter, shares traded for an average price of $238.61 each. He previously sold out of the stock in the first quarter of 2016.

The iconic fast-food chain, which is headquartered in Chicago, has a market cap of $185.65 billion; its shares were trading around $249.43 on Wednesday with a price-earnings ratio of 25.62 and a price-sales ratio of 8.28. 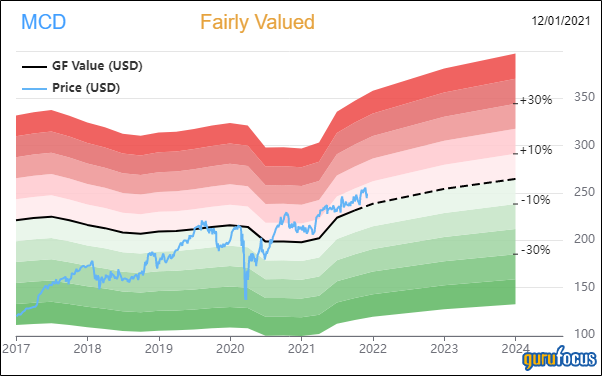 GuruFocus rated McDonald’s financial strength 4 out of 10. In addition to sufficient interest coverage, the company has a robust Altman Z-Score of 4.46 that indicates it is in good standing. The return on invested capital also overshadows the weighted average cost of capital, meaning value is being created as the company grows.

The company’s profitability fared better with an 8 out of 10 rating, driven by an expanding operating margin, strong returns on equity, assets and capital that outperform a majority of competitors and a high Piotroski F-Score of 8 out of 9, indicating business conditions are healthy. Although revenue per share has declined in recent years, McDonald’s still has a predictability rank of one out of five stars. According to GuruFocus, companies with this rating return an average of 1.1% annually over a 10-year period.

Of the gurus invested in McDonald’s, Halvorsen has the largest stake with 0.40% of its outstanding shares.

The investor sold his 2.9 million remaining shares of Aon (

AON, Financial), impacting the equity portfolio by -2.11%. The stock traded for an average per-share price of $268.54 during the quarter.

GuruFocus estimates Halvorsen gained 18.63% on the investment over its lifetime.

The British insurance company, which offers a range of financial risk-mitigation products, has a $65.45 billion market cap; its shares were trading around $297.84 on Wednesday with a price-earnings ratio of 75.39, a price-book ratio of 29.77 and a price-sales ratio of 5.61. 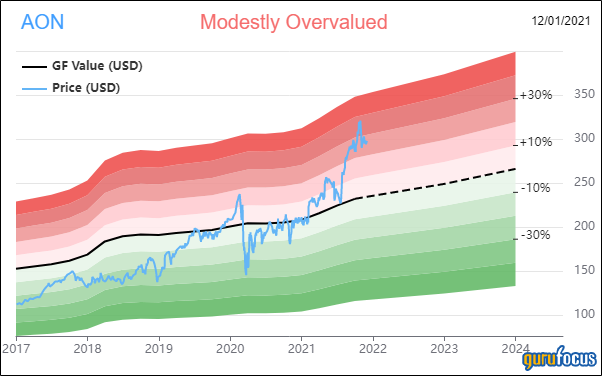 Aon’s financial strength was rated 4 out of 10 by GuruFocus. Although the company has issued approximately $2 billion in new long-term debt over the past three years, it is still at a manageable level due to adequate interest coverage. The low Altman Z-Score of 1.92, however, indicates it is under some pressure as a result of recording losses in operating income in recent years. The WACC also eclipses the ROIC, indicating struggles with creating value.

The company’s profitability fared better, scoring an 8 out of 10 rating on the back of operating margin expansion and strong returns that outperform over half of its industry peers. It also has a moderate Piotroski F-Score of 4, indicating business conditions are typical for a stable company. Despite recording consistent earnings and revenue growth, the 3.5-star predictability rank is on watch. GuruFocus says companies with this rank return an average of 9.3% annually.

Impacting the equity portfolio by 2.62%, Halvorsen expanded his stake in Humana (

The guru now holds 3 million shares total, representing 3.26% of the equity portfolio and is his fifth-largest holding. GuruFocus data shows he has gained an estimated 3.45% on the investment, which was established in the second quarter.

The Louisville, Kentucky-based health insurance company has a market cap of $55.11 billion; its shares were trading around $428.45 on Wednesday with a price-earnings ratio of 20.71, a price-book ratio of 3.41 and a price-sales ratio of 0.68. 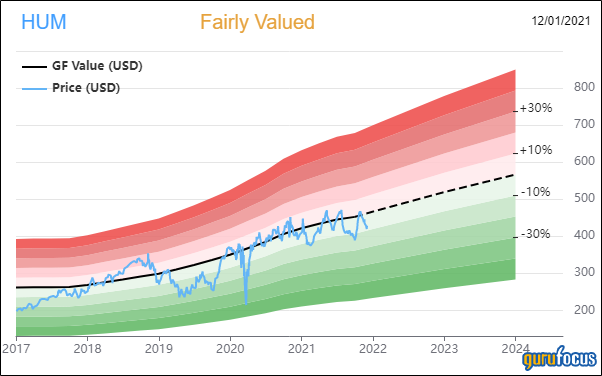 GuruFocus rated Humana’s financial strength 5 out of 10. Despite issuing approximately $5 billion in new long-term debt over the past three years, it is at a manageable level since the company has sufficient interest coverage. The ROIC also exceeds the WACC, indicating value is being created.

The company’s profitability scored a 7 out of 10 rating, driven by strong margins and returns that outperform a majority of competitors. Humana also has a low Piotroski F-Score of 3, suggesting operations are in poor shape. Despite having steady earnings and revenue growth, the four-star predictability rank is on watch. GuruFocus data shows companies with this rank return an average of 9.8% annually.

Halvorsen is Humana’s largest guru shareholder with a 2.34% stake. The

With an impact of -2.83% on the equity portfolio, the guru curbed the Amazon.com (

Halvorsen now holds 202,908 shares total, which make up 1.85% of the equity portfolio. GuruFocus data indicates he has gained an estimated 50.54% on the investment. 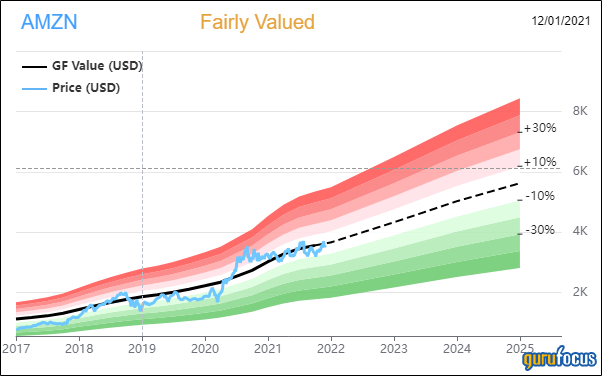 Amazon’s financial strength was rated 6 out of 10 by GuruFocus. In addition to a comfortable level of interest coverage, the company has a robust Altman Z-Score of 5.86, indicating it is in good standing even though assets are building up at a faster rate than revenue is growing. Value creation is also occurring since the ROIC surpasses the WACC.

The company’s profitability scored an 8 out of 10 rating on the back of operating margin expansion, strong returns that top a majority of industry peers and a high Piotroski F-Score of 7. As a result of consistent earnings and revenue growth, Amazon has a five star predictability rank. GuruFocus says companies with this rank return, on average, 12.1% annually.

Baillie Gifford (Trades, Portfolio) has the largest stake with 0.44% of its outstanding shares. Fisher and Pioneer Investments also have large stakes.

Other major trades Halvorsen made during the quarter included a new position in Comcast Corp. (

The guru’s $36.37 billion equity portfolio, which is composed of 95 stocks, is largely invested in the health care and technology sectors.